One crossbowman and many warriors...

Not much to show for the moment, except this crossbowman (this third unit is really hard to complete):


Now that the Brush Slave League is finished, I had to find another excuse to make me paint more dwarfs. The Bugman's Brewery forum gave me an excellent opportunity to start a new regiment: for the 3rd unit painting challenge, you have to paint at least 10 models including a standard bearer before the end of September... seems feasible with some holidays.

Here are the models I intend to present (well, at least 10 of them)... 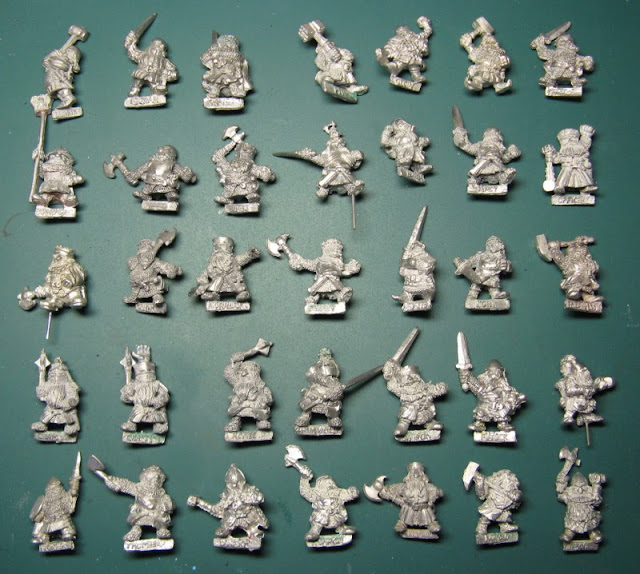 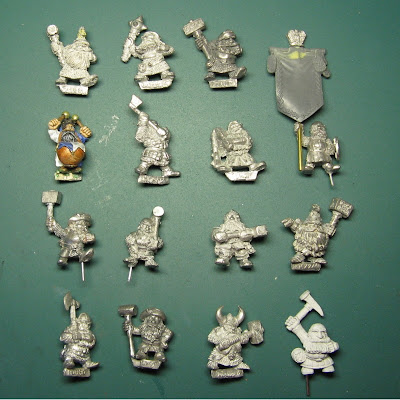 Last member of my trio painted for the 8th round of the Brush Slave League, I've slightly modified the helmet by adding a little flag from a bretonnian plastic sprue. As for the painting, I think I could have spent two or three times more hours on the armour (the NMM still lacks 'smoothness' on some parts). Fortunately, I had to stop to meet the BSL deadline :op 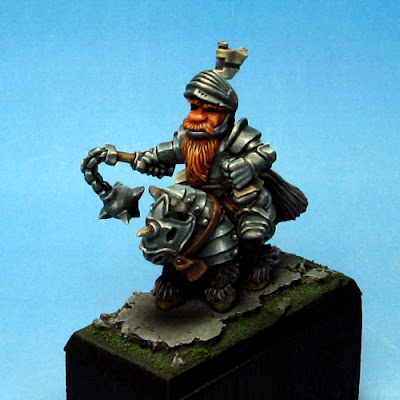 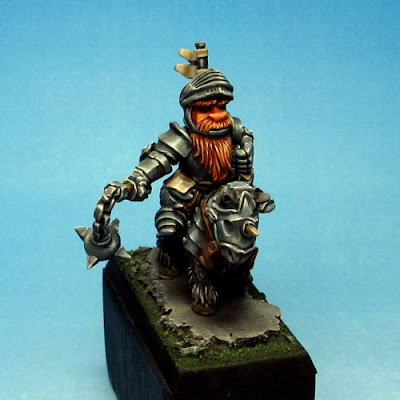 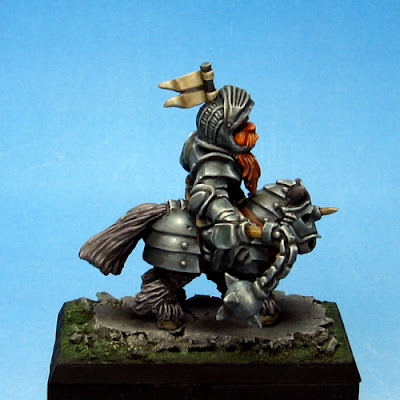 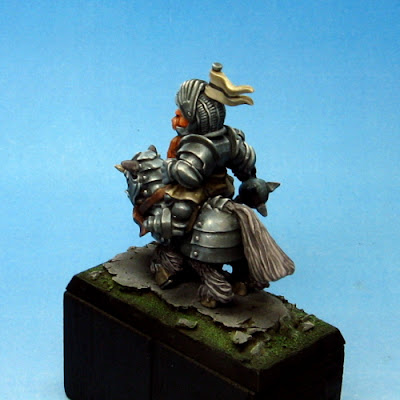 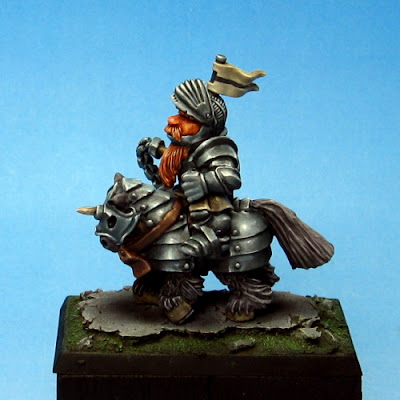 Now I'm considering changing his mace for a cavalry lance because for the best place for the musician is the right flank of the unit... 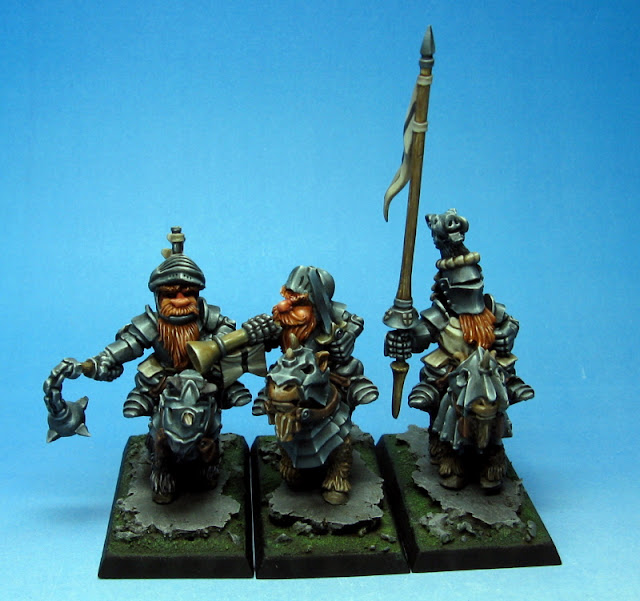 I just wanted to thank Clam for organising the second edition of the Brush Slave League on Chaos Dwarf Online. I'm really happy to have entered this contest, first, because it gave me the opportunity to paint 25 dwarfs in 8 months, and second, because I won! On top of that, Clam has commissioned John Pickford for designing a very nice trophee, the Mad Painter... I'm looking forward to painting this model!

So here is a summary in 8 pictures of what I've painted for the Brush Slave League: dwarfs again and again, and except the ugly mutant, they've been all recruited for my crusader army :o)

Thanks again Clam! And you painters, do not miss the third season this autumn: it's really fun and encourages you to paint even more minis!
Posted by Jaeckel at 1:07 PM 8 comments: 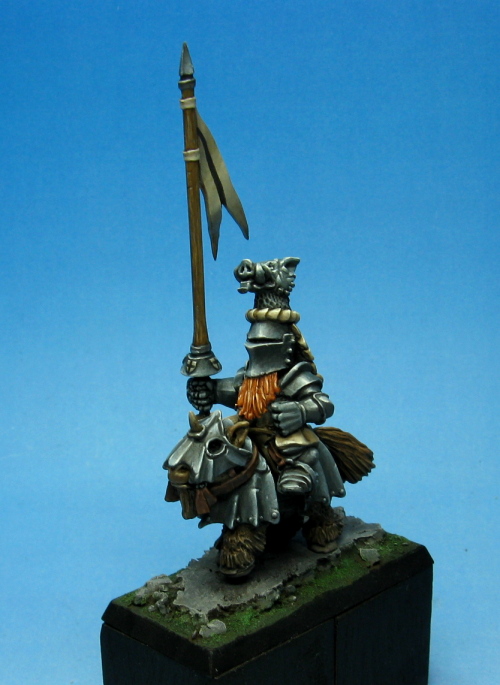 Second dwarf of my unit, I've simply swapped his lance for a plastic one from the box of bretonnian knights.

Initially, I was planning to post a step by step on the painting of this model, but I ran out of time and stopped taking pictures: so, here is the beginning of the NMM work on the armour. 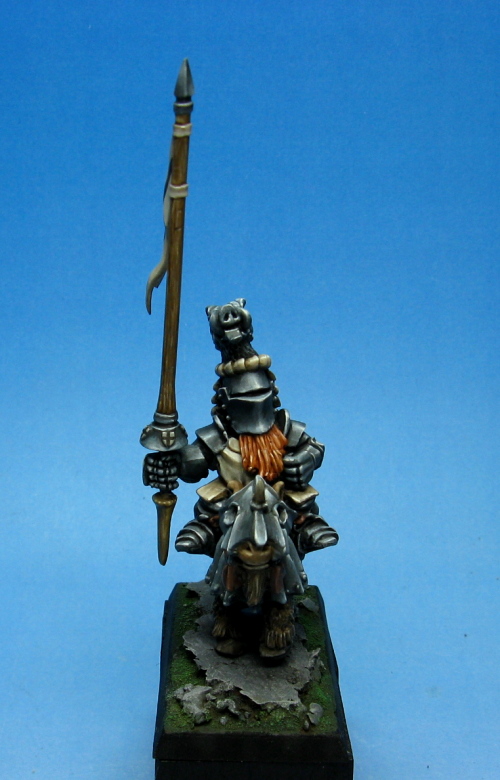 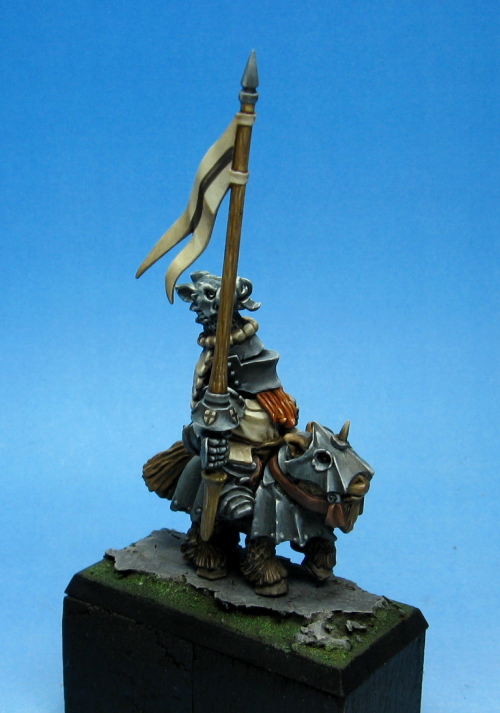 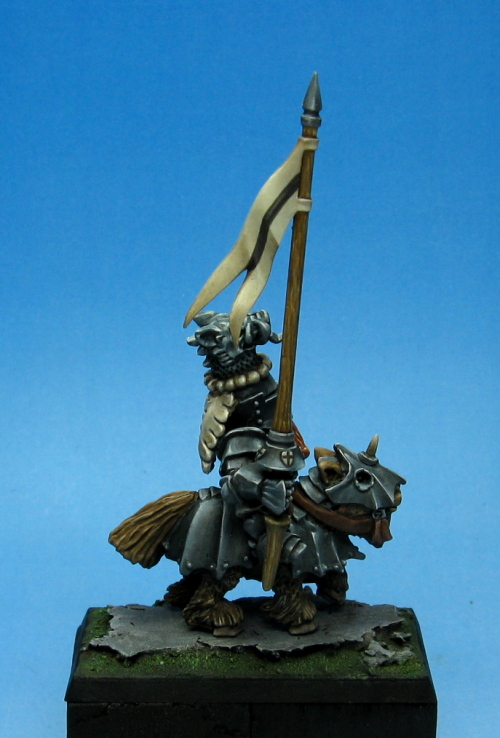 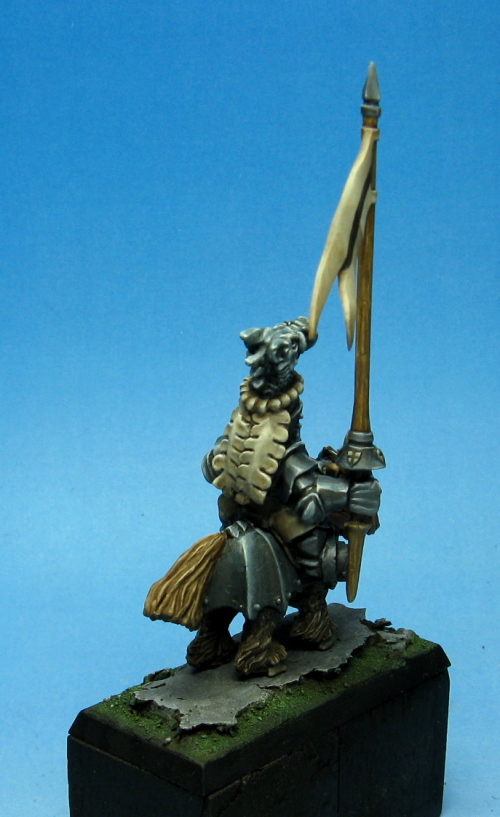 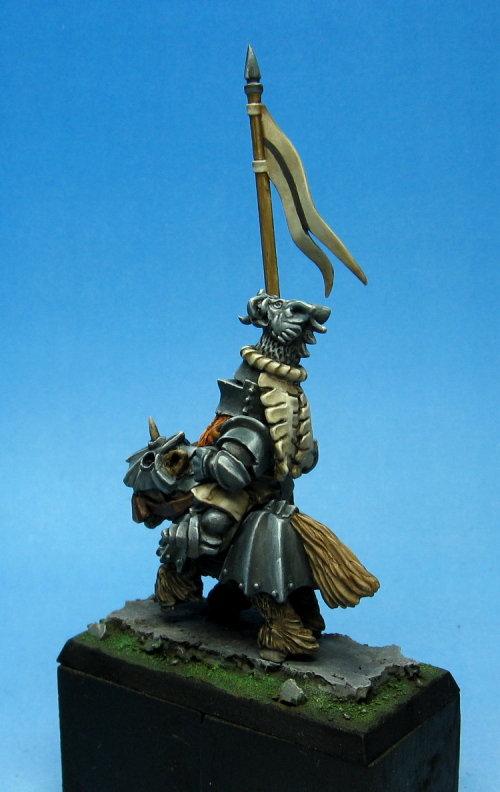 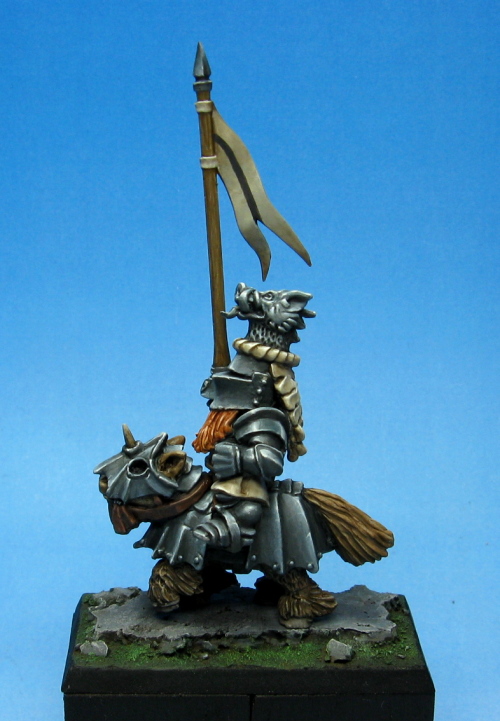 I know, I know, I was supposed to finish my crossbowmen then... Bam ! Clam announced the theme of the final Brush Slave League round: cavalry... Not exactly good news for a dwarf painter :(

Fortunately, White Knight has just released two packs of dwarf knights. Their style is clearly inspired from Renaissance armies, but by avoiding fancy plumets, I thought I could give them a medieval look (and I was wrong).

Anyway, my first painted knight was the musician of the band: not much to say, except I've filled the hole in his helmet to avoid adding a crest on top of it. Contrary to my previous dwarves, I've decided here to use pure black mixed with Dark sea blue to deepen the shadows of my NMMs. I'm reasonnably satisfied with the result, except the trumpet, to 'flat', and the flag, because I've been unable to paint a decent black cross on it... 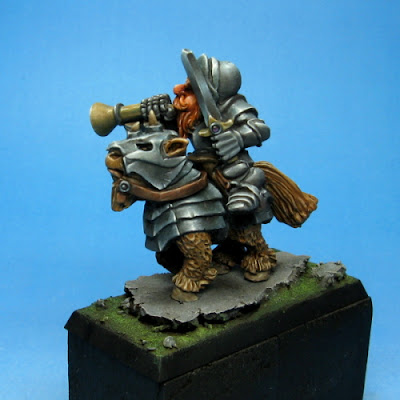 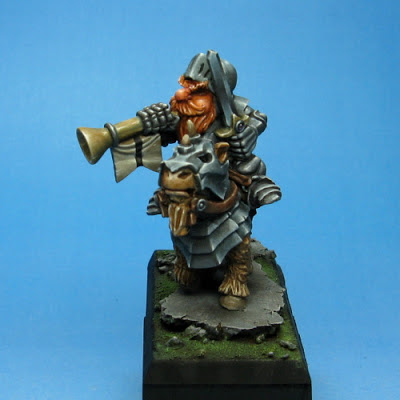 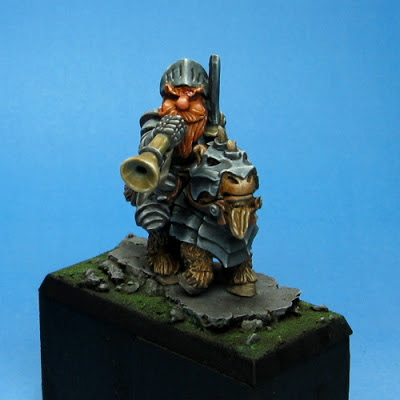 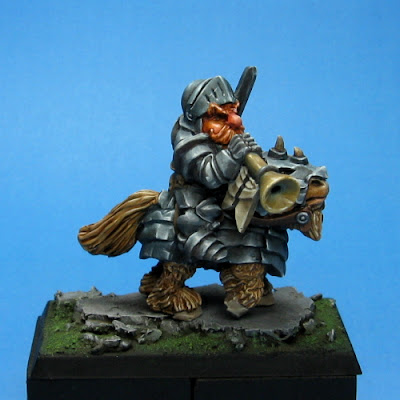 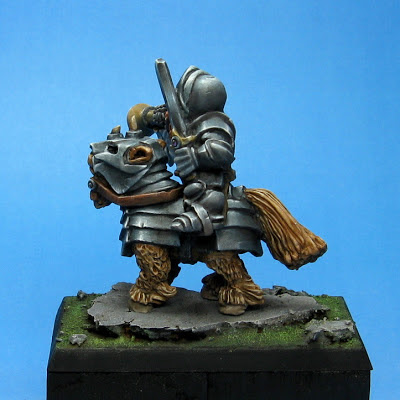 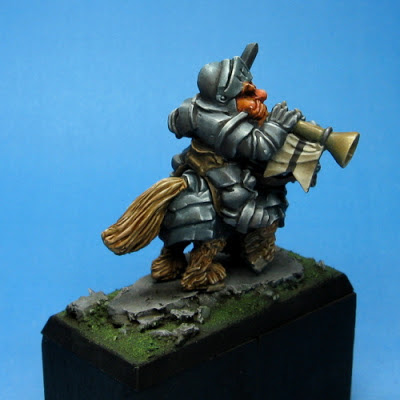