In 2017, I've focused all my efforts on the imperial army of Pfeildorf: I've reworked the 2016 flagellants, and added a second regiment of fanatics. The militia of the Guildhouse, initiated in 2016, is now complete, and I've reached my objective of achieving the 20 mandatory halberdiers. I have also added a second rank to the regiment of mercenary swordsmen.

As you can see below, some of the painted models are already useless: the monk, the beggar and the warrior-priest are not anymore part of the flagellants, the initial standard bearer of St Quintus has been replaced, and I have two fanatics on their own. 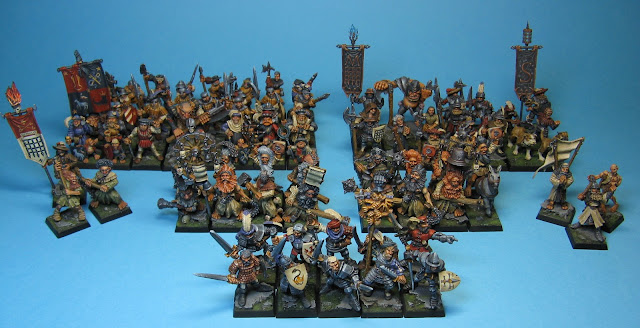 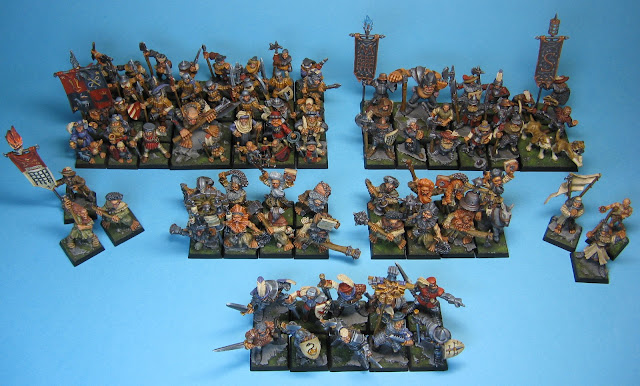 2017 has been an amazing year too for my collection of imperial models, with the acquisition of several unreleased Marauder Miniatures. The first one is already painted: the roman legionnaire. The other ones can be seen below: 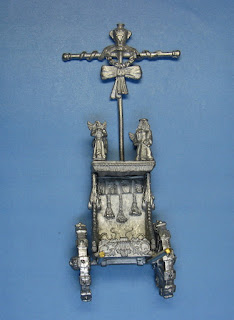 Beside that, I now have the whole MM62 Citizen range but one model: CZ 28, the girl holding a goose (if you have one and want to sell it, let me know).

Just kidding ^_^ I'm only using the rulebook to build the units I paint:


Let's see:
which makes only 787 points! And already two years spent on this army... Next time, I'll do High Elves :)

In the meantime, Happy holidays!
Posted by Jaeckel at 3:33 PM 16 comments:

The Guildmasters of Pfeildorf and their militia

I really wanted to complete this regiment before the end of this year. As I said before, the 8 last models painted these last two weeks were meant for the rear rank, so, even if the painting is not perfect, it is barely visible :)

Enough talking, pictures! On the front rank, the Guildmasters, the shield bearers and their fiercest bodyguard. Behind them, a bunch of Marauder Miniatures (mainly from the citizen MM62 range) and a last rank of Citadel Fighters/Dogs of War designed by Aly and Trish Morrison. 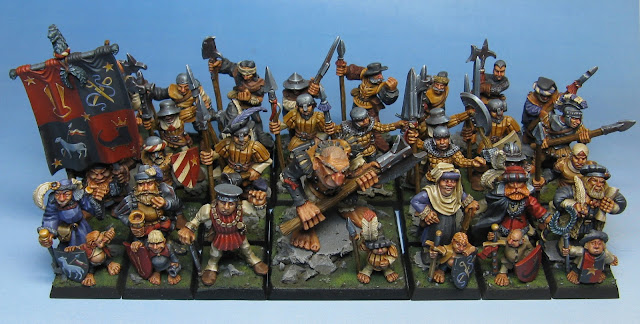 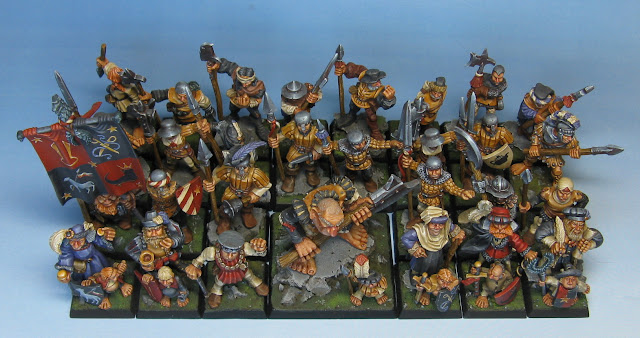 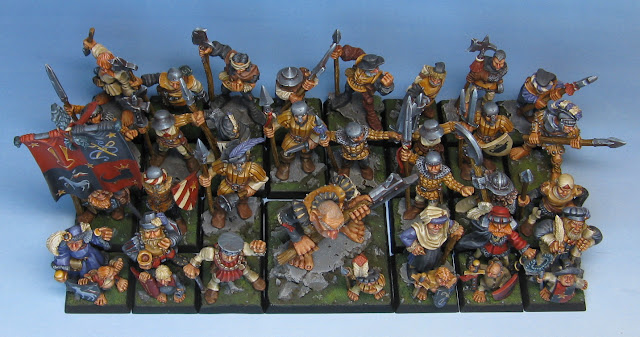 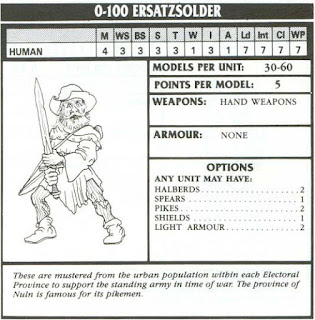 And now the army points: my militiamen are equipped with spears and light armour, plus a musician and a standard bearer, which gives a total of 272 points. Less than 10% of the whole army... Sigh.
Posted by Jaeckel at 10:45 PM 36 comments:

The two last models to complement the militia of Pfeildorf's Guildhouse are done :). Again, they come from the Citadel Fighter F2/Dogs of War range: Chauncey (the spearman) was probably designed by Aly Morrison, and I suspect that Dyer's head results from Trish Morrison's work.

Gaston spearer and the militia man

Two models from the Citadel F2 fighters range, most probably designed by Aly Morrison. The casting for these two guys was particularly bad, and the painting job was not easy... again, I'll hide them in the last rank of Pfeildorf's militia.

Two new additions to the militia, from the Citadel Dogs of War range, designed by Aly and Trish Morrison. The sculpting job is sometimes odd, but they'll do the job in the rear rank :)

Back to Pfeildorf's militia, this time with the Citadel Dogs of War, designed by Aly and Trish Morrison. I think we can attribute Cowden to Aly, and the odd modifications leading to Gustav to Trish...

I've decided to rework the banner of the Mórrsfeld district to maintain a coherence between the different watchmen. I have therefore replaced the old watchman designed by Trish Morrison by a MM60 fighter (F27). This is the second time I paint this model, and as mentioned before, this is definitely not my favorite miniature.  Here, I've removed the shield boss on the left hand, and replaced the original halberd by a dark elf plastic standard (topped by a flame coming from Celestial Hurricanum sprues). For the banner, I've kept the idea of the portcullis, but used the "M" letter as a reminder of the unit origin... Same colours as the ones used for the Söllhafen district. 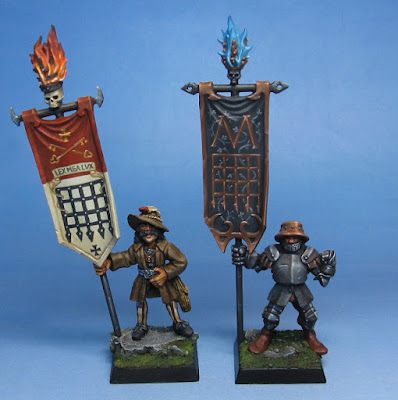 Final pictures of the unit: 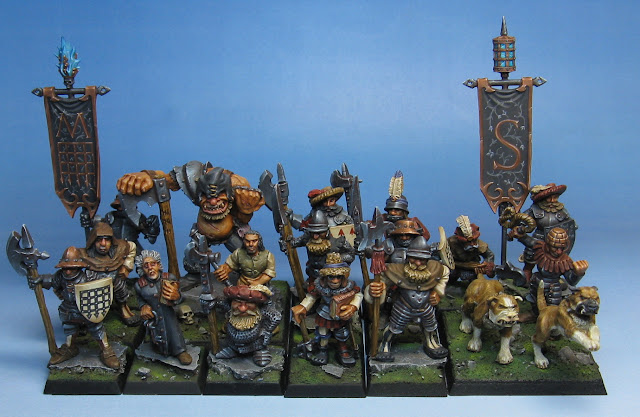 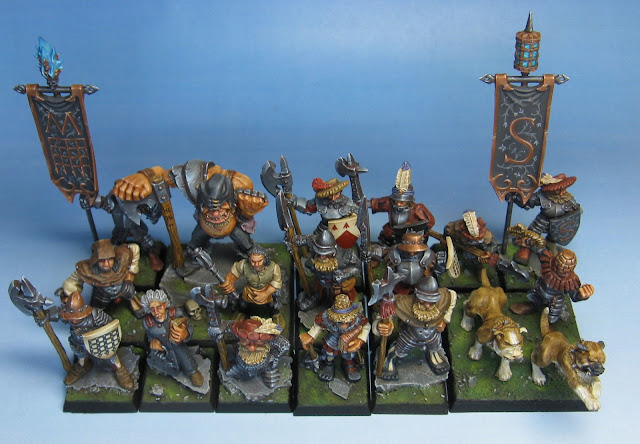 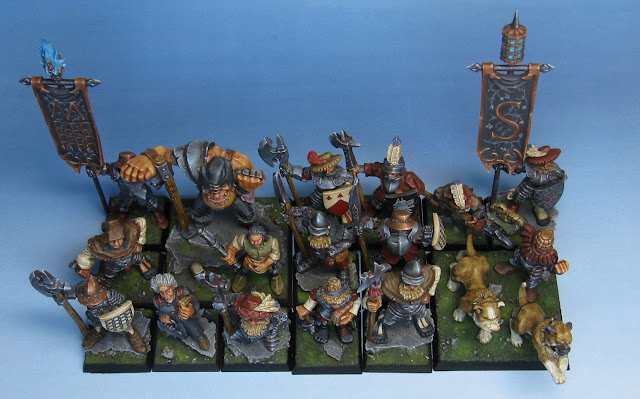 To be honest, I had other plans for this regiment, including a third and wealthier district, a musician, a second ogre, and a larger banner, but for the moment, let's consider the mandatory Helblitzen as done...
Posted by Jaeckel at 1:56 AM 18 comments: