The dwarf mine syndrome

I don't know if you've ever tried to collect the old Citadel dwarf miners, but they're damn hard to get at reasonnable prices on eBay! My theory is it's all Dave Andrews and Phil Lewis's fault. Their article about the building of a dwarf mine published in WD 132 was so inspiring that 20 years later, I keep trying to buy the models you can see on the picture below to build a copy of this mine, and my guess is that I'm not the only crazy maniac to do that :o)

The full article:
So, have you a better explanation?
Posted by Jaeckel at 9:16 AM 5 comments:

Now I'm approaching the end of my regiment, it's time to think about the standard bearer. You may remember that I want to give a "Crusaders" look to this army, which means that I need banners and not the dwarf icons I usually choose (NMM is much easier to paint than a large piece of cloth).

The problem is my last attempt in making a banner with epoxy putty was not really satisfying. 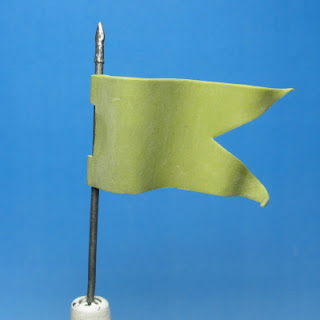 Thick, large and no fold, it made the painting job rather tedious... 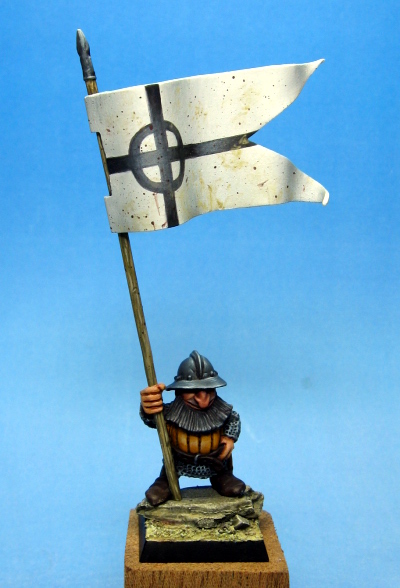 So, instead of working hard until I get a proper result, I've chosen the easy way: plastic standards on old models! On the left, you'll recognize an imperial dwarf with the new Dwarf warrior banner; and on the right, the Bugman's standard bearer with the upper part of a Bretonnian knight's lance.


The second one will probably defend the colours of my axemen regiment: I like the simplicity and the "irregular troop" look of this model...

Here is the last guy of my monthly trio painted for the Brush Slave League. Again a Marauder dwarf, but this time, the painting wasn't so easy: look at the blade of his axe, and try to figure out what kind of matter it is... Is it fur, is it metal? Hard to say :p

Anyway, I'm quite happy with the final result, and I think it could be a decent champion for my unit... I'll see if I can find a better candidate for the job among the next models.

Here are two clansmen from the Marauder Miniatures MM15 range. I really like these models, and they're one of the reasons why I've given up the idea of a Renaissance dwarf army: hard to see them as landsknechts!

When I first saw the dwarf landship of Paul Robins among the 1991 Golden Demon winning models, I was totally amazed by the quality and the originality of his entry, trying to identify all the miniatures he had used to achieve his masterpiece. The multiple boar heads ornementing the cabin roof and the sides of the ship, the swivel guns, the head of the Tzeentch Demon as figurehead, the step-ladder and the cannon of the Marauder Miniatures dwarf siege gun, and so on...


The funny thing is at that time, I didn't know that the core of this ship was a real model, edited in the eighties by Games Workshop: the Dwarf Juggernaut, a steam-powered warmachine, which preceded by a decade the Empire steam tank (now we know that the human race stole our technology ^_^).

And guess what, thanks to Thomas from Germany (thanks again!), I am now the proud owner of a dwarf juggernaut. Of course, since I have only one model, I won't try to convert it, even if, if I remember well, I had bought some swivel guns and other artillery pieces with this idea in mind... Anyway, here is a couple of pictures of what I've just received for my 40th birthday.

Needless to say that there's a lot of preparation to do before considering painting this monster: I don't know when I can start working on this model (I have to finish my unit of warriors first), but I hope the final result will be worth the time (and the money!) spent on it.
Posted by Jaeckel at 10:04 PM 12 comments: