Now, back to the picture of F2 fighters released in White Dwarf 92, and let's try to find additional members of Aly's family:

Well, that's it, we have identified a good part of Aly's fighters, indistinctly attributed to Aly and Trish Morrison in White Dwarf 87:

Now, based on the Militia pages in the 1991 Red Catalogue, which credits Aly Morrison and the Perry twins for the miniature design, we know that the green dotted Enrico Boldlance (Halberd 7), the Gunnery captain (Mace) and the Arquebusier (Arquebus) were also designed by Aly Morrison... 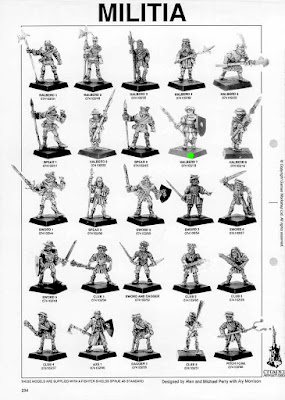 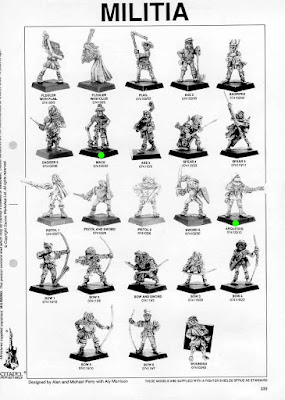 ... which leaves us with Rombustus Sellsword, the Mercenary crossbowman, Ernst Stoutheart and Astol the Archer:

.
Given the face of these models, plus the dynamic pose of Rombustus, the crossbowman and the archer, there is little doubt that they were sculpted by Aly Morrison!

Let's check again the militia pages of the Red Catalogue and compare them to the Dogs of War page from the 1988 Citadel Miniatures Catalogue, crediting Aly and Trish Morrison as the designers of the whole range. The purple dots designate the models found in common in both catalogues, wich allows attributing them to Aly Morrison. 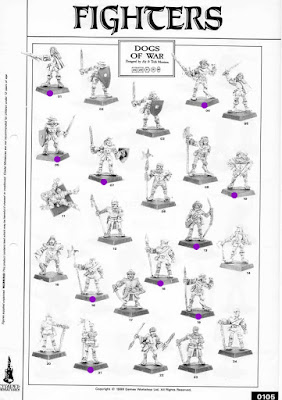 Now playing  the "Game of Clones", the following miniatures can also be assumed to be designed by Aly Morrison: 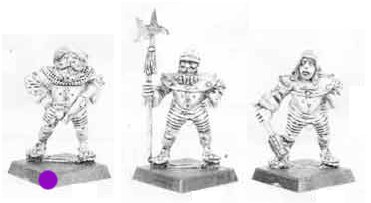 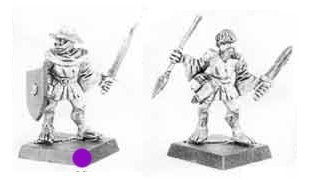 which leaves us with the following models without a sculptor's name to put on: 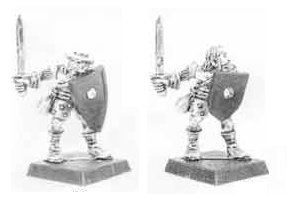 Well, if you have any information, feel free to share :)
Posted by Jaeckel at 12:18 PM 4 comments:

Now that my collection of Empire Marauder Miniatures is almost complete (almost!), I am considering complementing it with the Citadel fighters sculpted by the same guy, Aly Morrison.

I have indeed realised that most of the models I liked in the Citadel human fighters released in the eighties were probably from this sculptor. Probably, because if I'm more or less able to guess what are the miniatures sculpted by Jes Goodwin, I have more difficulties to differentiate Aly's work from his wife's or from the Perry twins'.


Take these two pictures for instance: easy job, all these F2 fighters are said designed by Aly Morrison. And indeed, I want them all ^_^ (well, almost all - not fond of the woodsman, the militia man and the border guard).

Now take this one: models designed by Aly and Trish Morrison.


So what are the models actually designed by Aly Morrison? The obvious thing to do first is to identify the "clones" using the same base slightly converted (heads and/or weapons most of the time). Here we go:

Now refering to the Red Catalogue (1991), we can see in the footnotes that the models on the page below were designed by the Perry twins with Aly Morrison... 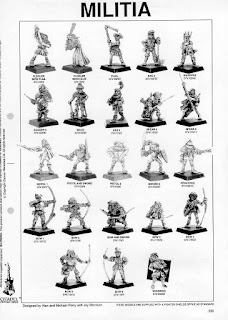 ... which means that we can also attribute to Mr. Morrison the second fanatic and Bertrand the Red (plus the archer of course):

Now, using this picture identifying Aly Morrison as a designer of paladins, I can also attribute to him some additional pairs of models...

... which is not necessarily good news, as I don't like these models.

Note that Sir Kit Breaker and Lackland come both from the knightly hero opposed to the Great Fire Dragon, designed by... Bob Naismith. Are the credits just for the dragon, or do they include its opponent? Mystery unsolved... 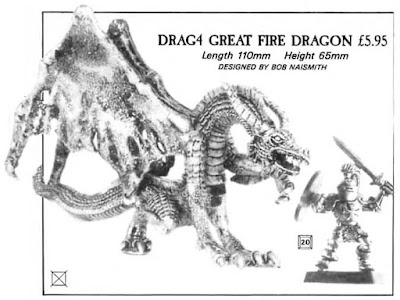 An older reference (see below) includes Trish Morrison in the paladins designers and my first move was to attribute to her the models I'm not fond of...
... until I realise that that Trish Morrison could simply be credited for at least one of the Paladin models not shown in the 1988 Catalogue, namely Simon the Templar (no better picutre) and Sir Kull of death (see below). 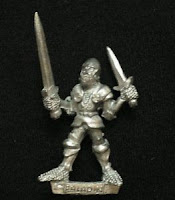 Among the remaining models, I have little doubts about Sir Errol de Swash (his face seems to me rather typical of Aly's style) and I think that Sir Monne de la Monte is a valid candidate too (close to the MM60 Fighter F6). If Sir Pression de la Masse is Aly's work, I'm afraid that I have to consider that Le Marquis de Sword is his too.

For the other paladins, Sir Osram, Maurice the Chevalier (I love these stupid names ^_^) and Lord Aven, I have definitely no clue...

Back to this second picture and the last unknowns: 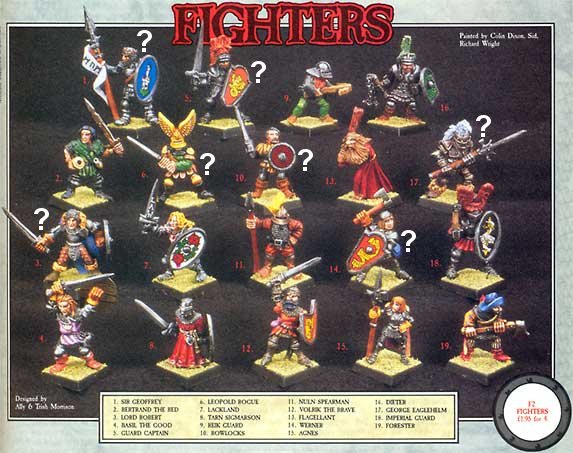 To be honest, I'm not fond of models 1 (Sir Geoffrey), 3 (Lord Robert), 6 (Leopold Rogue) and 17 (George Eaglehelm), and I'd like to think that they were designed by Trish.

If anyone has information on these last 6 miniatures, let me know! 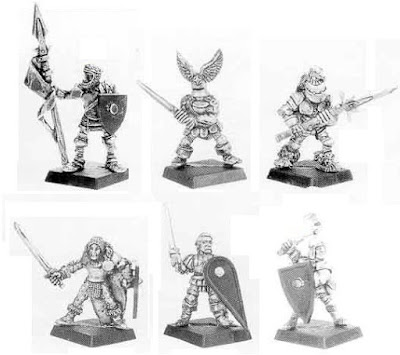 (couldn't find a decent picture of the captain guard)

Edit. Now I know why it's so difficult:
http://eldritchepistles.blogspot.fr/2014/02/the-nuln-spearman-and-guard-captain.html