This time, two models designed by the Perry brothers. I've got them for more than 20 years, but I've never been able to paint them, mainly because of their (ugly) plastic weapons.

Thanks to Stone Cold Lead, I've discovered that Wargames Foundry produces metal crossbows (you have to ask them, it's not visible on their website): for 5 pounds (plus shipping cost), you'll receive a pack of 16 weapons. And as you can see, they work pretty well with Citadel minis:

Below, a picture for size comparison: 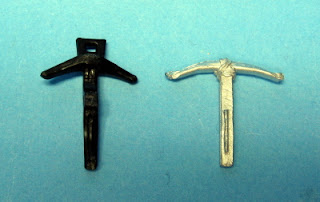 I've been trying to finish my second unit of crossbowmen for several weeks now, and it's really not easy. The reason is I don't like the last models I have in my possession, and I don't feel a desperate need to paint them. But before starting something more exciting, this has to be done... (boring)

So, let's start with two Maurauder Miniatures quarellers, probably the worst models of this range: look at their clothes, they look like dressing gowns! Fortunately, the beard of the red hair guy is really nice to paint.


And before I forget, Clam asked me to explain how I take my pictures. So here is my painting and shooting corner: two IKEA desk lamps equipped with day-light bulbs and a blue sheet of paper. 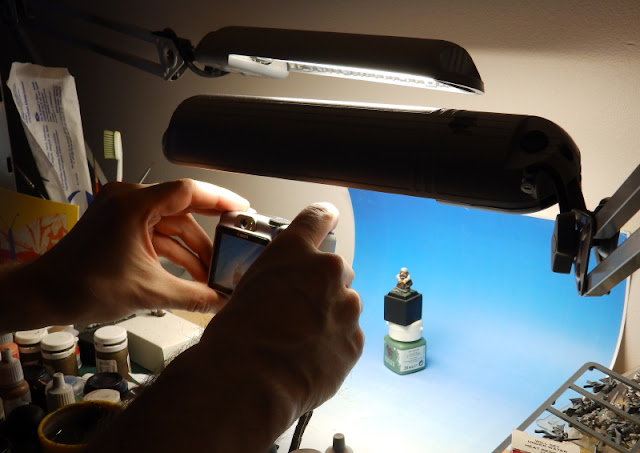 Last phase of my cunning plan, a series of articles published in 1991 featuring the painting of a Bretonnian army. To be fair, I have mixed feelings about this one: some models are really great, others are barely tabletop level. Still, some tips and design ideas can be very helpful and if you're not totally convinced, check Blue in VT and Stone Cold Lead's blogs to see OOP bretonnian models painted by talented guys.

To my knowledge, it all began with a 'Eavy Metal article published in WD136 explaining the painting of bretonnian knights (if you look closely at the second picture, you'll notice the unique apparition of some crossbowmen, knights and men-at-arms probably coming from an older army). 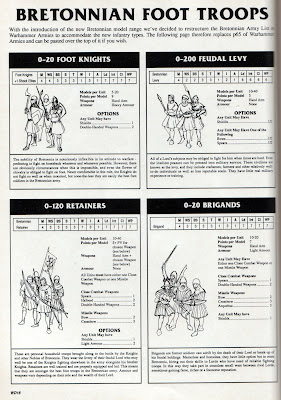 Best article of the series IMO, WD138 showed a new unit of knights and three character models: the General, the Army Standard Bearer and a Wizard. Painted with more care than the rank and files, they really stand out and give us a glimpse of what a bretonnian army can be when painted at the highest standards.

As far as I know, WD143 featured the last addition to this army: a regiment of Mounted Spearmen, painted by Neil McIntosh and Matthew Fletcher.


"The horses were all painted different colours, but the techniques for the shading and highlighting were the same. After the base coat was dry, the highlights were gently drybrushed on in lighter shades of the base colour. To smooth out any roughness in the highlights, a thin wash of ink was applied before the reins were painted in Chaos Black. When the black was dry, the reins were painted Skull White, leaving a thin line of black on the edges of the reins to make them stand out against the horse. Finally, the white coat was painted over with Blood Red." 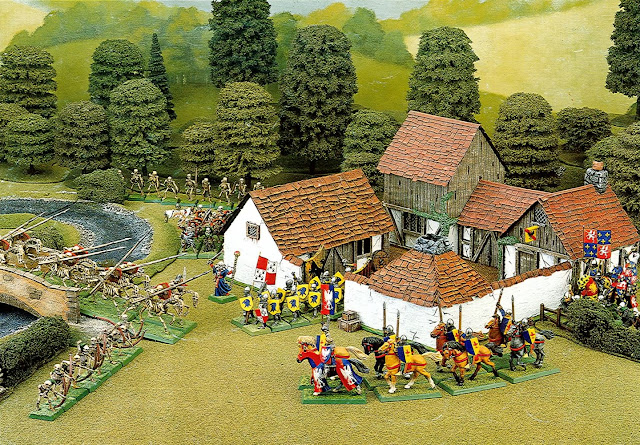 Tired of beards, heavy armours and short legs? Good news for you: Citadel has also produced a whole range of Wood Elves. And when you'll see Mike McVey's incredible army, you won't hesitate anymore: long bows, cavalry, eagles, wardancers... I count to three and when you wake up, you'll start collecting a new army...

We, old fashionned dwarf collectors, should praise Grungni for Mike McVey's choice: imagine the result if, instead of Wayne England, who is a very honorable painter, Mike McVey, the ultimate 'Eavy Metal artist, had decided on dwarfs. 20 years later, even the ugliest model would sell for crazy prices... well, OK, it's already the case :(

So back to WD141: 10 pages of pure delight. If one excepts the first regiment of plastic wood elves,  I think we have here the ultimate weapon to make the dwarf prices collapse: striking color schemes, amazing painting job, banners designed with the help of John Blanche and Jess Goodwin and great conversion ideas... IMO, the best army ever published in White Dwarf.


Three months later, Mike McVey published in WD 144 the last big unit of his army: the Elven Lords cavalry. Again, a pleasure for the eyes and hopefully, an inspiration for starting a new OOP collection :o)