As you may remember, my initial plan was to build an Empire army entirely composed of Marauder Miniatures, based on MM60, MM61, MM62, MM64 and MM65 references. Facing the absence of some types of troops (in particular the crossbowmen, a mandatory regiment according to the Warhammer 3rd edition Army book), I've allowed myself to include Aly (and sometimes Trish) Morrison's models designed earlier for the Citadel and the Talisman range.

Unsurprinsigly, this resulted in a systematic collection of all the imperial miniatures I could find designed by Aly Morrison, and a number of models by far exceeding Pfeildorf's military needs. Despite the recruitement of mercenaries, bowmen, crossbowmen, militiamen and watchmen, the green dots (painted models) remain quite rare compared to the red dots (just owned models).


Rather than extending indefinitely the ranks and files of my Pfeildorfers, I've decided to join the third edition of the OWAC and use the next 6 months to reduce the number of red dots with a new army theme: the crusades against Araby, and more precisely, the one (mis)led by Pieter the Pious.


Once there was a man, who called himself Pieter the Pious, and who led an army of fanatics into the parched land of Araby. On his journey across the Empire, his rhetoric and charisma turned many men, women and children to his cause. They followed behind him, chanting dirges and chastising themselves until their passing was marked with many trails of blood.
Somehow, they managed to find passage across the sea to Araby. But after that, the mouth of history becomes silent. Rumours abound. Were they swallowed by the desert? Were they destroyed by vengeful sand gods? Nobody knows...

Extract from "Armies of the Hammer - The Forgotten Crusades"


(*) Actually: "Blood on the Reik - A journey Through the Old World" - a Black Library product

... but some pretend that their story ended tragically, with the pilgrim army sold into slavery.

Follow ye not in the wake of Pieter
Over the sea to the land of sand,
Your blood will boil in the hot, hot sun,
And into the teeth of death you'll teeter

Ah, the joy of painting a doomed army :)

All right, let's start with the Empire citizen who followed Pieter's call.
Poorly equiped with rusty weapons and wooden shieds, they are led by a fanatized paladin, Sir Monne de la Monte. I will count them as Ersatzolder (and give them a leather armour to make more points). Note that compared to this picture, posted on OWAC blog in December, I've already changed my mind for the standard bearer, who will join instead the unit of noblemen. 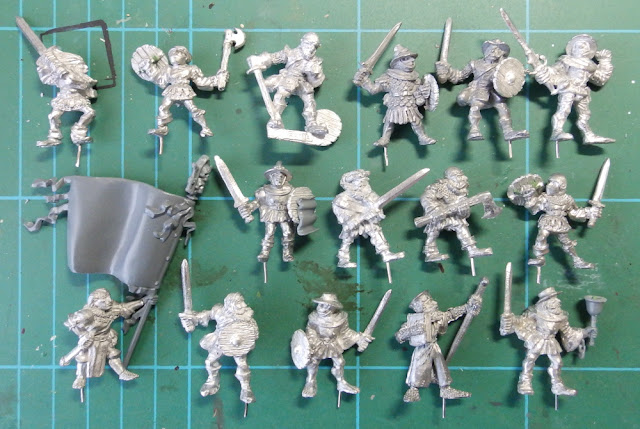 Beggars, crippled veterans, lepers and fanatics are also part of the trip: I will count them as Fleglers, even if they inspire more pity than fear. Since this picture was taken, I've converted the second beggar into a standard-bearer, and the third one into a musician. 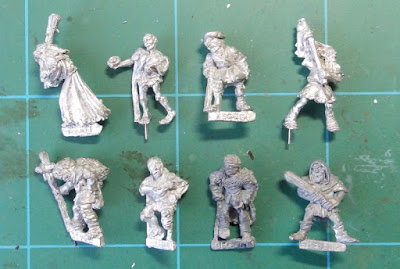 Monks and religious will make acceptable Helblitzen. In the heat of the desert, pilgrim's staffs can look like halberds. Compared to this picture, the wizard on the left now holds the standard of the procession, and I've added candles on some staffs. 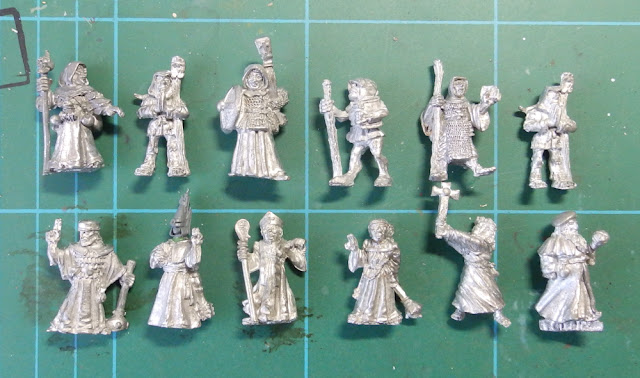 Pieter the Pious also managed to convince some noblemen to follow him. Whether they looked for fortune or salvation remains unclear... I will count them as Reiksgards.

When they arrived in Araby, the pilgrims were joined by a few hermits. Living on their own in the Arabian desert, half - if not totally- mad, they make excellent scouts, and will count as Bergjaeger, replacing the traditional long bows by long range arquebuses. Since this picture was taken, the 5th flagellant has been promoted as standard bearer of the company.

Last but not least, Pieter the Pious will be the commander of this pilgrim army: as there is no priest profile in 3rd edition rulebook, let's count him as a wizard. No miniature to show yet, as I plan a conversion involving a war altar...

A regiment started 3 years ago I think, to use the MM60 Fighters models that didn't fit into Pfeildorf's militia or City watch.  It was high time to put an end to it!

This post will be probably the last one dedicated to my Pfeildorfers for a while. I've joined the OWAC III madness, and I'll focus my painting efforts on a brand new army in the coming months.
Posted by Jaeckel at 4:47 AM 22 comments:

With some Marauder and Citadel mates: 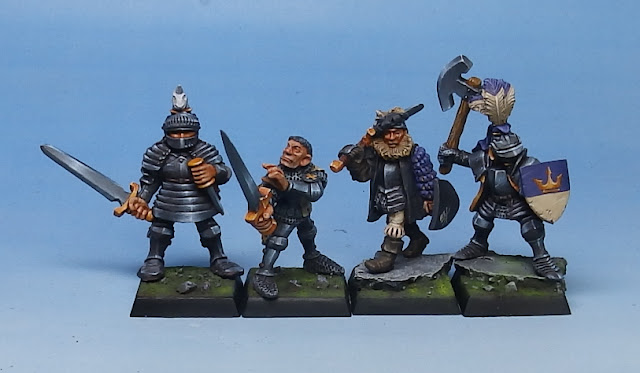 Not a swordsman, obviously, but I didn't know where else to put this Marauder Miniatures model. Still one model to paint to complete my regiment of mercenary swordsmen :)

Email ThisBlogThis!Share to TwitterShare to FacebookShare to Pinterest
Labels: MM60

A couple of swordsmen, both designed by Aly Morrison. Still two to paint, and I'll be done with my mercenaries... 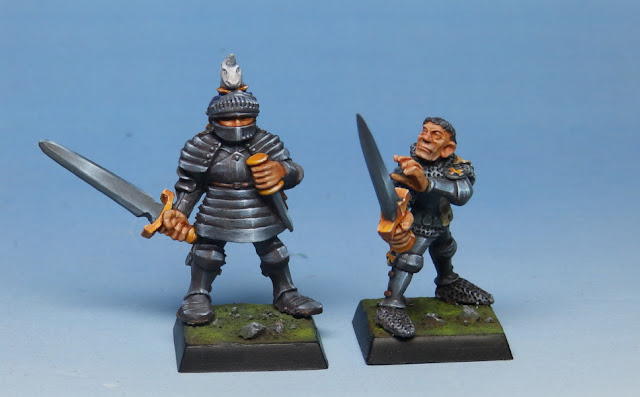 A closer look on Errol (I really like this model):

Small conversion of Dieter Muller, one of the F2 fighters designed by Aly Morrison: I've replaced the mace by a sword, and inserted a trumpet in his closed fist.

Same sculptor, same pose, two swordsmen designed by Aly Morrison, the former for Talisman game around 1985, the second for the Marauder Miniatures range around 1988 (a member of the command group MM61).


You may have noticed a slight change in the colours between the two models: I've changed my camera, the new one gives brighter tones (see below). 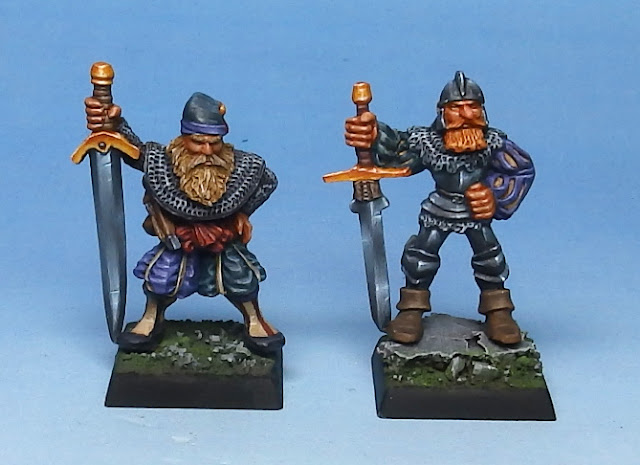