Painting standards have always been a challenge for me: combine large flat surfaces and a recurrent lack of inspiration, and you understand why the standard bearers are often the last models to join my regiments.

As already explained for the City Watch, I wanted to paint two to three contingents of halberdiers, with a distinct identity related to the district they belong to. The first one, Mórrsfeld district, was quite easy, thanks to the St Quintus prison. For the second one, my plan was to paint some of the watchmen that patrol along the docks of Söllhafen district. The two dogs are supposed to control the merchandise arriving from Nuln or Karak Hirn, and my original intent was to use them as mascots for the regiment... but painting a dog head on a first shield has been so difficult that I needed a simpler design for the standard. Looking for something related to Renaissance, I finally stumbled on the capital letters used in a XVth century manuscript, De Situ Orbis... waaaay easier to paint than some animal head :p 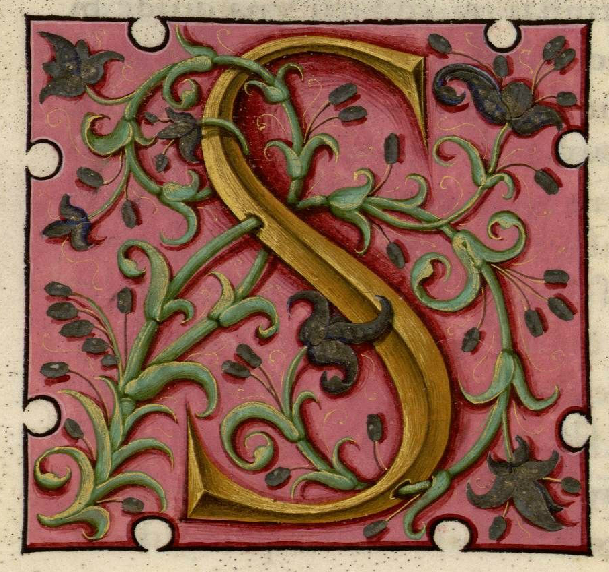 The original model is a fighter from the MM60 range (F25). I've replaced the halberd by a Dark elf flag and a lantern from the Corpse Cart (GW). As you can see, I've painted the S of Söllhafen on the flag and on the shield. 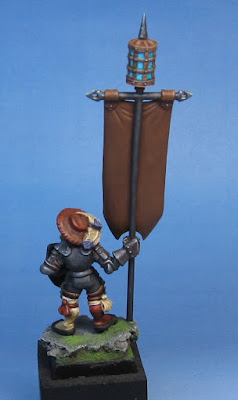 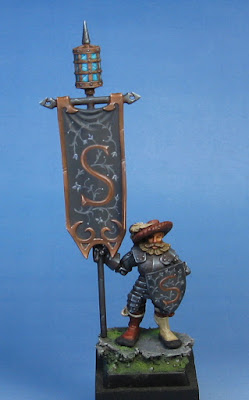 And the whole Söllhafen band: 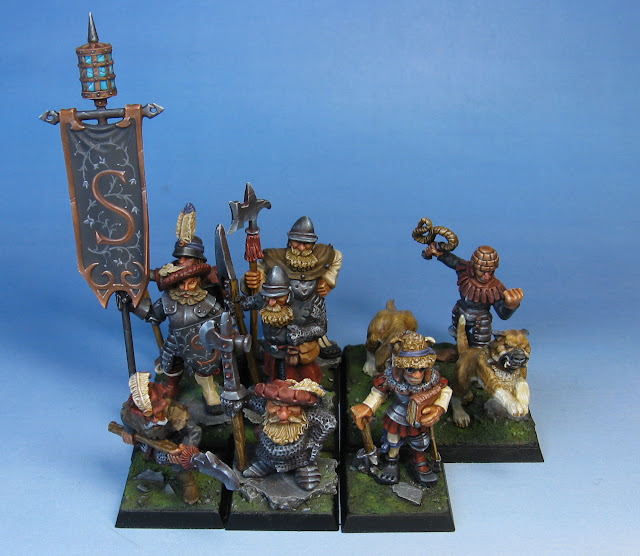 I thought I was done with this second standard bearer. But I'm afraid I have now to rework the colours of Mórrsfeld district to have something close to Söllhafen. Endless story...
Posted by Jaeckel at 5:56 AM 9 comments:

Pfeildorf has welcomed dwarf refugees for many generations. Contrary to other imperial cities, there is no Dwarf quarters or ghetto here, as the Dwarfs live peacefully alongside the Humans. No wonder in these conditions that some of them have enrolled in the City Watch.

This model is a Marauder Miniatures from the MM10 range (reference DW21). Always a pleasure to paint one of these bearded guys :)