Second batch of hammerers for this month: a warrior, the standard bearer and the leader, all from the Citadel imperial dwarves range.


For the standard bearer, I've used some brass rod and the lower part of Alvaro Echeverria's flag, a Hell Dorado westerner miniature. I still have some doubts about the colours I've chosen for the leather apron: maybe a black and white schemewould have better worked with the rest of the unit.


For the leader, I've replaced the initial mace by a hammer from Hasslefree Miniatures.


And now behold the Black Boar Company in all its glory :o) (well, at least the first half) 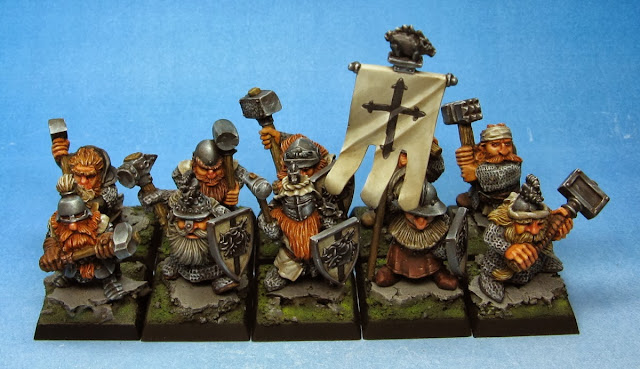 So, after one year of blogging, I've been able to paint around 50 dwarves (50 !!!), probably three times my usual annual production. Unfortunately, I have now to move out and start a new job, and I doubt that I can keep this rythm in the next months... We'll see...
Posted by Jaeckel at 5:05 AM 7 comments:

Sorry, not many posts in september, but I've spent all my free time trying to complete a small band for the Bugman's Brewery unit painting contest. So today, the Marauder warriors, and hopefully tomorrow, the Citadel ones.

Nothing much to say about the first hammerer: the usual chainmail and not-so-white tabard.


For the second one, I've replaced the axe by a hammer coming from an old box of plastic warriors. And the figure on his helmet gave me the idea  for a regiment name: the 'Black Boar Company'.


The third one nicely fitted with my newly found theme: the helmet crest, plus one of my precious Marauder shields.


And a second boar shield for the last one... Only 6 shields left, I'll have to choose carefully my models if I want to complete a 20 men regiment...

As I've never played Warhammer (and maybe never will), it may seem strange to try to build an dwarf army list. Actually, considering that I keep buying stuff on eBay whereas I have enough models to field a 4000 or 5000 points army, I think it's rather a sound idea :o)  So, my goal is to build an efficient and balanced list in order to define my purchasing and painting priorities...

Let's start with the shooting troops. Up to now, I have completed a unit of 10 crossbowmen and the second one is still waiting for its two last quarellers.

Since I have some extra models (can't help buying them!), now I'm considering adding a third ten crossbowmen (the two warriors with an axe have also a crossbow attached in the back).

So, unless somebody tells me it's a big mistake, I'm going to forget the idea to field a unit of thunderers: first because firearms don't exactly fit with my idea of an army of the Crusades, and second, because I'm afraid it could be really boring to fight against so many shooting troops...

And now, fighters. For the moment, I've simply painted a regiment of 20 dwarf warriors with double-handed axes and light armours. On second thought, maybe it would be wiser to buy an extra protection for them: that means aligning on the first rank the few guys carrying a shield... not my favorite models, but you have to make the best of things! 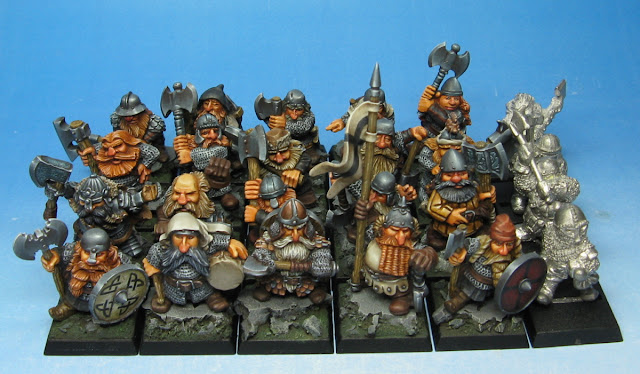 As you can see, I'm also thinking about strengthening this regiment with new warriors to make me paint some recent acquisitions. So, if you have any hints on the ideal size of a fighting unit (5x5, 6x4, 8x3...), let me know!


For my second regiment, I intend to equip my dwarf warriors with shields and spears. Not sure about their tactical interest, but since I've painfully collected about two tens of  spearmen, I feel obliged to use them. So let us consider 20 warriors including a standard bearer, a musician and a level 5 hero to lead them. 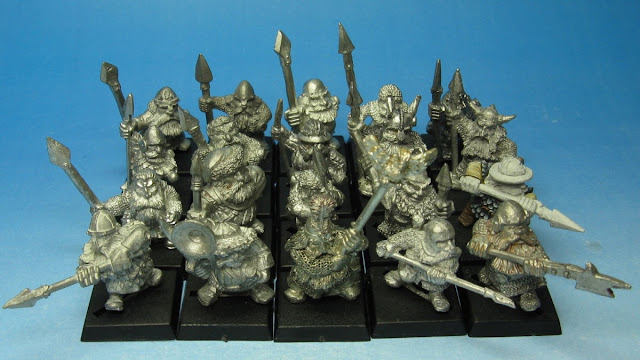 Now the 'improved' fighters. First and foremost, I want to include some of the beautiful imperial dwarfs designed by the Perry brothers. I think they'll make perfect veterans or 'Longbeards' for my army. I will align the maximum of them (meaning 20), including standard bearer, musician, and a level 10 hero. 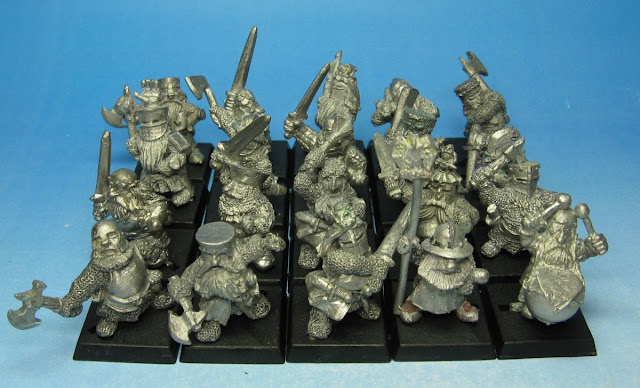 And finally, the elite warriors: hammerers. I hadn't planned to include them until now, but I've recently started to work on dwarves equipped with double-handed hammers for a painting contest, so... I think I'll use them as bodyguards for my army general. Again, I'm not sure about their number: maybe 16, including the level 20 hero and a standard bearer.

So, if we sum up:
which makes 1517 points, half the budget in rank and file... seems reasonable to me, doesn't it?

First, the war machine I have already painted: a fire thrower. 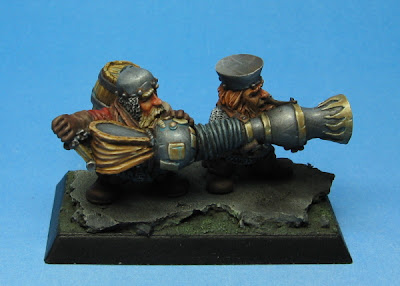 Then, what needs to be done: again, nothing to 'modern', considering the medieval look of my troops. So, I'll take a second fire-thrower, a stone-thrower (actually Haekel's Gob Lobber), a bolt-thrower, an old bombard and the flame cannon, which gives a total of 440 points:
To be honest, I have some doubts about the second fire-thrower and the flame cannon: the models are not very well sculpted and are difficult to paint. I hope they're worth the effort in terms of lethal power!

As mentioned before, my general will be a level 20 hero with heavy armour, shield and double-handed weapon.

The longbeards will be led by a level 10 hero with heavy armour, shield and double-handed weapon.

And the two last units will receive one level 5 hero each, equipped with heavy armour, shield and double-handed weapon.

Ah... I almost forgot the wizard: just one Level 15 for the moment, but considering the number of models I have,  I will proably replace him by two lesser sorcerers in the future.

So, let's do the math:
Which gives me about 350 points left for improvements such as magic artefacts, additional heroes, war engines or units. Any suggestion?

Are mithril armours worthwhile for instance? Would it be a good idea to add a fast moving unit to this dwarf army? I have only two dwarf knights left to paint to add an Old World contingent of 5 'count as' Imperial Templars (291 points)... 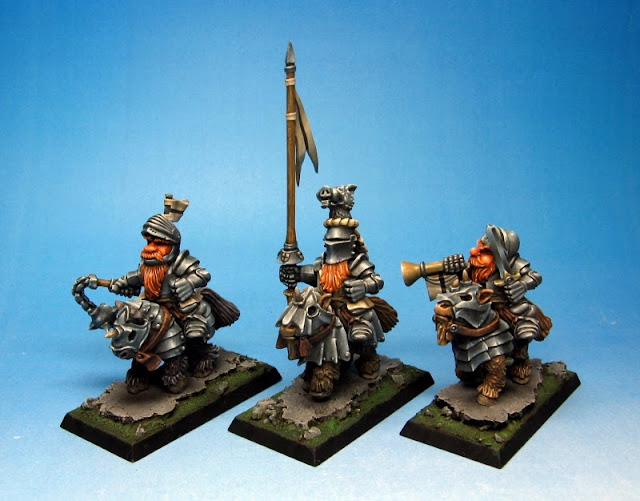