To tell the truth, I am not totally happy with the arms I have designed for the city of Pfeildorf, as I find my three arrow heads a little bit simplistic (or said differently: lazzy).

So, for my third swordsman, I've tried to push my limits a little bit further and looked for something more "imperial"... finally found in the 3rd Edition Warhammer Fantasy Armies book.

I have based the shield with VGC Bonewhite (on a white basecoat) and drafted the half eagle and the half checkered with The Army Painter Soft Tone ink.
Once done, I have redrawn the eagle with VMC Black Red 859 and filled it with VMC Cavalry Brown 982.
For the checkered part, I've used an intermediary black from the Andrea range, deepened with VMC Dark Sea Blue 898, and highlighted by adding Bonewhite to the base. For the white squares, I've used Soft Tone ink mixed with VMC Extra opaque Heavy Brown 153 for shadowing, and VMC Ivory 918 for highlighting. Et voilà!

Waving at the train

Short update with a model I promised to paint a few months ago. Not my usual type as you can see, since it's for somebody who's in the model railroads hobby.

The miniature is about 40 mm high... and to be honest not very well sculpted (I don't know the manufacturer). 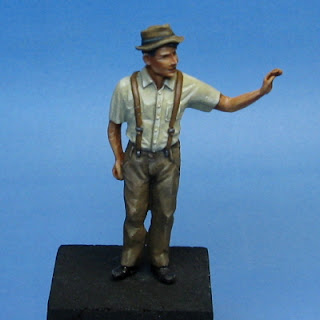 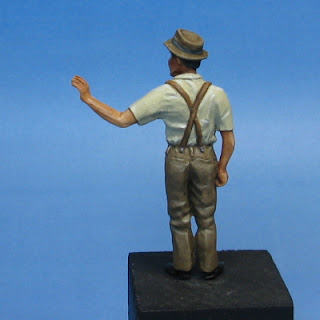 I've tracked this model on eBay for several years and finally found two of them last June... (the second half the price the first one), which more or less triggered the beginning of the swordsmen unit.

So here is the MM60 fighter referenced F21:


PS. Don't expect new updates soon, this was the last model painted during the holydays :|
Posted by Jaeckel at 11:15 PM 2 comments:

First piece of my next regiment, I'm postponing the halberdier thing and starts instead the painting of MM60 fighters holding swords. So, here is F26: 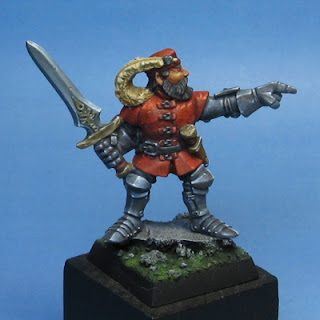 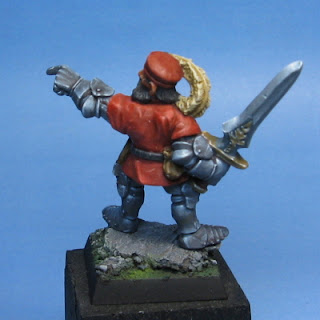 Two models painted during my summer vacation. The standard bearer is a slightly converted MM62 citizen: the flag comes from a high elf plastic sprue, ornemented by a gryphon originaly on top of a Marauder dwarf standard, and the left hand holding the sword comes from an Empire box (I think it's the Greatswords one).