OK, time for a break in this neverending dwarf painting story: after collecting the whole Kaon the Idolator army, then a few tens of Marauder Dark Elves, then 2 to 3 thousand points of Jes Goodwin's Wood Elves, and of course a bunch of Skaven, I've finally decided to paint... an Empire army :)

As a former player of the Warhammer Role Playing Game,  I've always liked the Empire described in the Enemy Within campaign... quite different from the one depicted in Warhammer Fantasy Battle from the 4th edition, where Karl Franz rules as the undisputed leader of a united country.

In "my" Empire, I imagined smaller armies, with poorly equipped militia, brutish soldiers, greedy mercenaries, and noble houses fighting each other, unaware of the very distant Chaos threat. Actually, checking the 3rd edition Warhammer Armies supplement, the introduction to the Empire section corresponded rather well to this vision.


The Emperor maintains his own Imperial Guard, and each province within the Empire also raises small standing armies, supplemented by town militia and peasant levies. In addition to these forces, there are the feudal retinues of provincial nobles and the various secular and religious orders of knighthood.

An army might represent either the full military might of the Empire, led by the Emperor at the head of the Imperial Guard and supported by Templars of all the knightly orders, or just the standing army of a single Elector state, bolstered by mercenary contingents or Templars of the local cult.

Obviously, what we saw in the White Dwarf issues preparing the release of the 4th edition of WFB was the army of the Empire in full glory: bright colors, impeccable uniforms, pistoliers, handgunners,  and war machines that would make the most hardened dwarf engineer blush.


Don't get me wrong, I like the job done by the Perry brothers on these models (I've even started to collect a small force of them), it's just that it doesn't fit with what I have in mind for the Empire.

So, my army won't use anything from the 1992-1993 Citadel range. I guess I could have selected instead the imperial range sculpted in the 80s by the Citadel team, which includes great models for town militia, peasants and mercenaries. Unfortunately, the number of fanatics is very limited (one or two models), and the cavalry has an historic flavor that I don't like... which leads to my final choice: Aly and Trish Morrison's Marauder Miniatures.

Compared to Citadel, the range is rather limited (which is good for an obsessive collector), but also rather expensive (less good), even for poorly sculpted models. In summary, we have:

I'm mainly after the hero on pegasus, plus a few fighters and citizens (check my Want list if you want to sell some), and of course the unreleased models (the fighter and possibly one wizard), but all in all, I think I've gathered enough miniatures to field a 2000 point army.

The main issue I have is the lack of shooting troops: within the MM60/MM62 range, there is only 1 handgunner (F7) and 4 archers (F10, F19, CZ18, plus CZ9 with a bow tied in the back), and absolutely no crossbowman. Problem: I need at least 10 of them to comply with the minima defined in Warhammer Armies. It will probably end with some simple conversions of duplicates, unless I violate my self-imposed constraints and incorporate some Citadel models. I also plan to add at least one warmachine, but the dwarf siege gun (MM12) will do the job without much effort (conversions of MM62 models should be easy to make the crew).

In the end, regarding the Empire army list, my painting priorities should be the 20 mandatory Helblitzen, followed by 10 Armbrustschutzen. I'm also planning to work on at least 10 Reiksgard knights, 8 to 16 Fleglers and 5 Bergjaeger. For the cavalry (most probably Stadtsknechtes), the Reiks Kanone Batterie and the characters, we'll see later.


I still have to define a color scheme for the army. Next year ;)

PS. Hmm too bad these illustrations were not in color. Still a great inspiration for an imperial force:

Check the first post for this army: October 2012... About 1200 days to paint 114 dwarf miniatures and 4 warmachines: 1 model every 10 days during more than three years... Yes, I'm an authentic monomaniac :)
Some of these dwarves were bought more than 20 years ago, when I was trying to make the same army as Wayne England. The funny thing is most of the models I've painted here are the ones I don't like! Initially, my plan was to paint the whole range of Imperial dwarfs, with chain mails and tabards. But since I couldn't find a proper color scheme, I've started with the guys in gambesons (easy to paint: just leather brown), then chainmails (easy to paint: just grey), and in the end, I've avoided as much as possible to pick up the "classic" imperial ones, telling myself that I will build the next unit with them... which never happened.

Three years and a quarter is a looooong time to keep the painting mojo, even more when you don't plan to play with the final result. Comments posted on this blog, and online painting contests (on BugmansBrewery, MiniCreateurs or Chaos Dwarfs Online fora) have helped a lot to stay focused on the final objective. Thanks a lot to the organizers and to you, readers.

Oh, and before I forget, from my now "old" experience of army painter, I would only make one recommendation: start the job with paint references that are still in stock! I had to find substitutes to GW Chestnut Ink, Elf Flesh, Dwarf Flesh, Bleached Bone, and Devlan Mud inthe middle of the process. For the latter, I've finally replaced it by Agrax Earthshade, but the resulting white tones on the last models are really different from what I got on the first crossbowmen.


Below some attempts to shot the dwarf army as a whole. 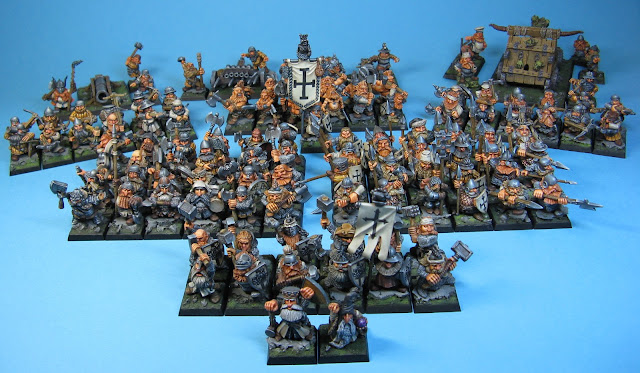 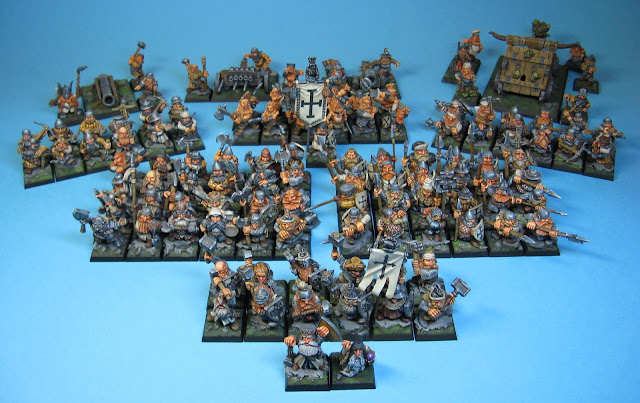 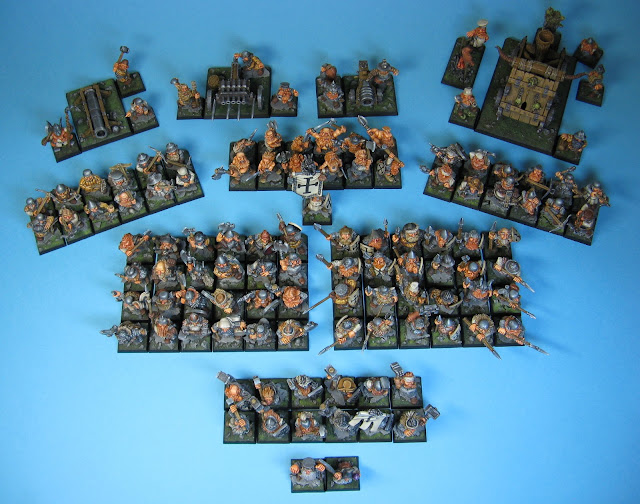 Yep, "Spellsmith", that was the name of Level 5 wizards back in the 3rd edition days. 78 points, just enough to reach the 2K objective! As you can see, the model also inspired David Gallagher to illustrate the Dwarf section of the Warhammer Armies book.

I have stolen the idea of the magic globe to Darren Latham, who painted an incredible Celestial wizard in 2009 (pictures published in White Dwarf, can't find them on the internet). For the rest, same old colour scheme of black, white and brown.


And that will be all the characters. 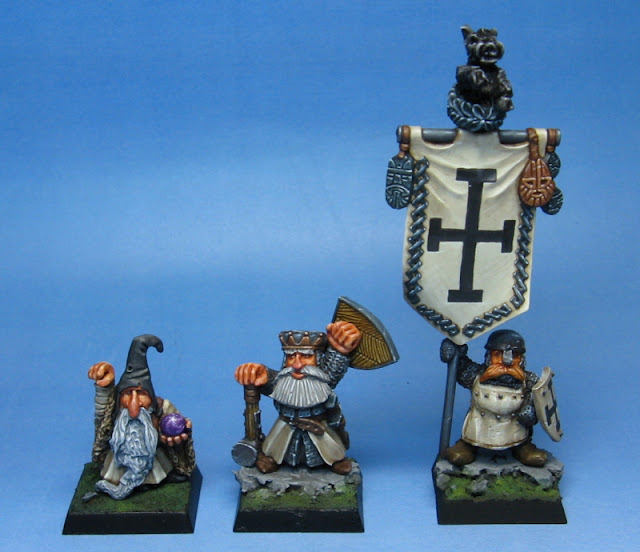 This is not the initial commander I had in mind to lead my army, but in the end, he will do the job :) (until I finish my conversion of a Lord on war boar...).

I had bought and painted this model about 25 years ago (in the white and blue scheme of Wayne England's army, of course). Now cleaned and re-painted, this model hasn't aged. Great sculpt.

The cook and the return of the Goblobber

OK, this cook is my least favorite member of the goblobber team, and I initially didn't want to paint it (plus the fact that the roasting spit was broken and I was too lazy to fix it).

But comments read on different forums have changed my mind and here it is. As you can see, the fireplace (another piece I wasn't fond of) has been incoportated into a 25x50 base on which I've glued the cook. It works better that way IMO. 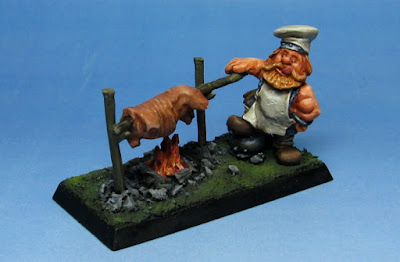 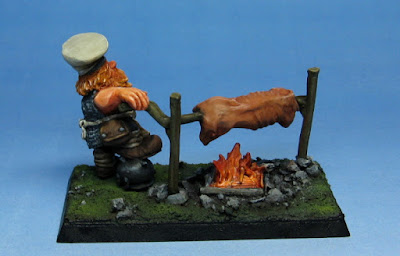 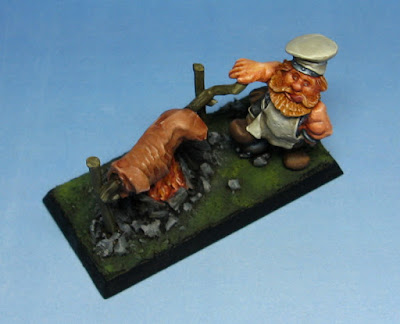 And now the whole team posing in front of the goblobber :)

OK, a lot of time spent on this miniature, desperately trying to give volume to the army standard, and clean shades to not-so-clean white clothes.

The model is a light conversion based on an Imperial dwarf, using a boar from White Knight's excellent range, a shield from Wargames Foundry, and a flag from a GW plastic sprue (can't remember which one).

The Goblobber is a gift from my old friend Haekel and it will be the last addition to my rank & file troops. I've just discovered in the Warhammer Armies book that I needed 25 additional points to buy sufficient goblin ammunitions and convert an ordinary stone-thrower into this splendid war machine, which makes the lot 85 points worth, which means I'm closer than expected to my 2000 pts objective. Good news :) 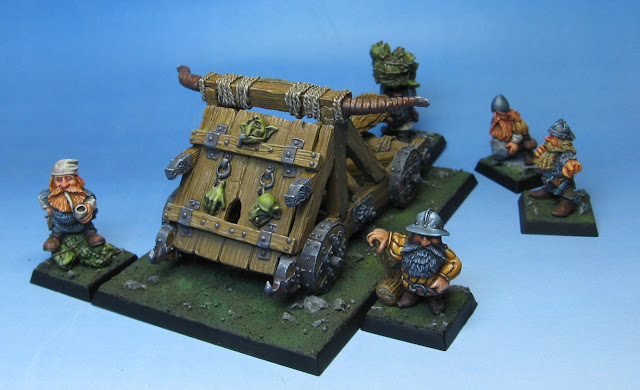 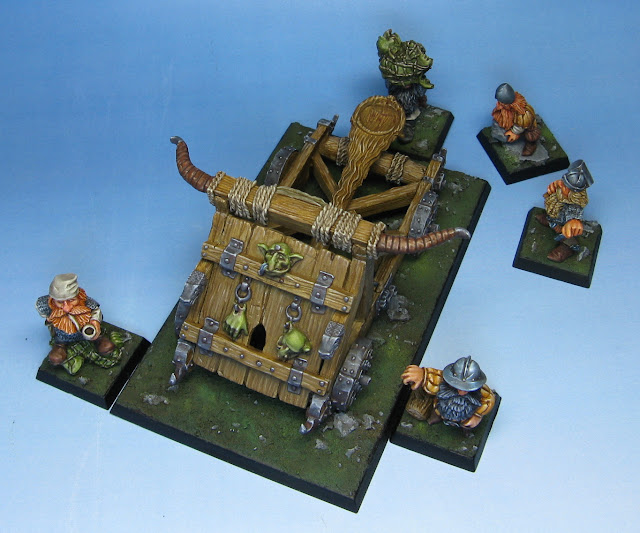 And without the crew: 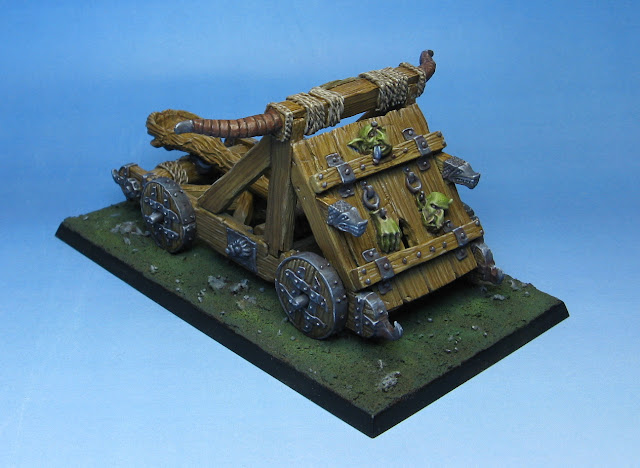 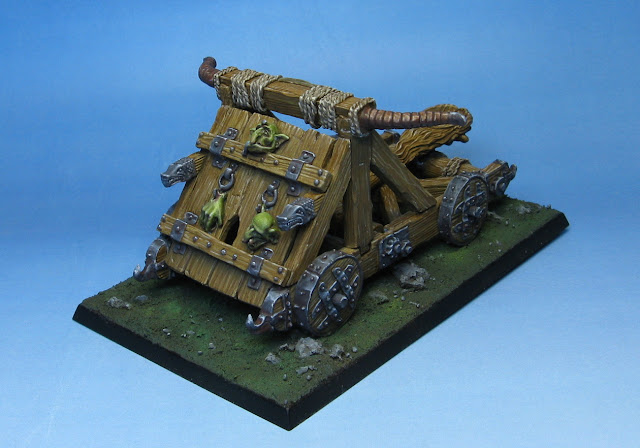 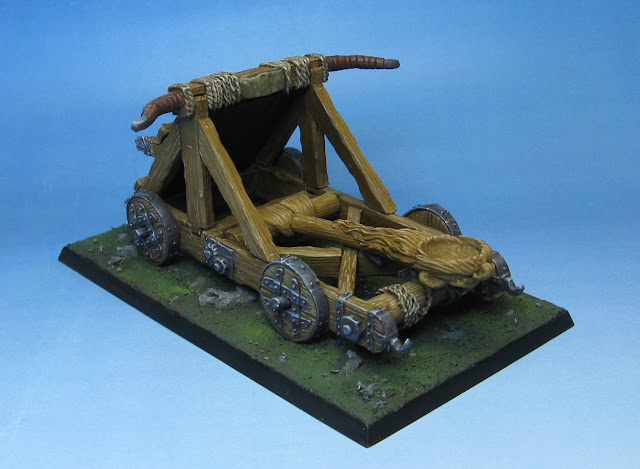 Fourth and fifth members of the goblobber crew, here are the spotter and the commander.

Posted by Jaeckel at 2:24 PM No comments:

One month without post, but for a good reason: I was trying to complete my last war engine, the gob lobber. Let's start with the loaders. Again, I'm not totally happy with the painting job, I really need to end this army, to renew my motivation (and possibly change my colours).


And the two other guys:

Posted by Jaeckel at 7:58 AM No comments:

Just a short post to recommend an excellent comic book, "Le Chevalier à la Licorne", published by Soleil. The illustrations are absolutely fantastic, and a great source of inspiration for us, fantasy miniature painters. Below the cover and the first pages.

By the way, the story is quite good too! A short summary by the editor:

1346, the Battle of Crécy. Juan de la Heredia, a Knight Hospitaller, offers his horse to the King of France who is in a bad position. Surrounded by the English,
he takes off his armour in a fit of ardour, freeing his movements and his anger. The rage to kill keeps him alive, but Juan is now its prisoner. He starts pursuing a unicorn, as one would follow a dream... 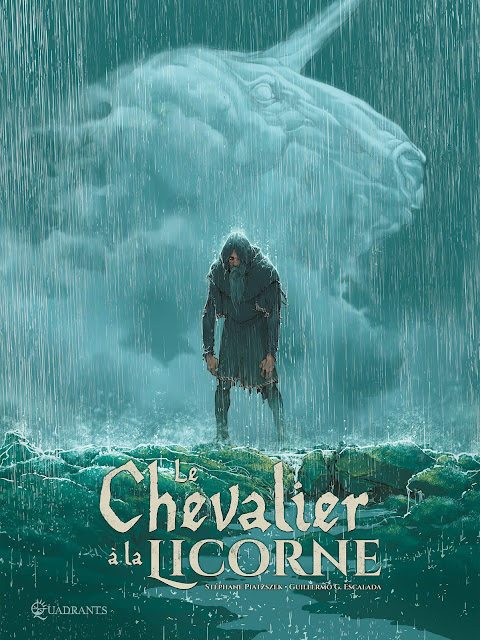 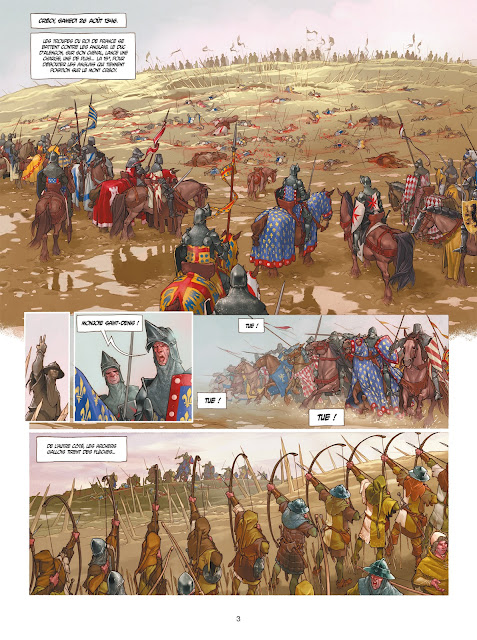 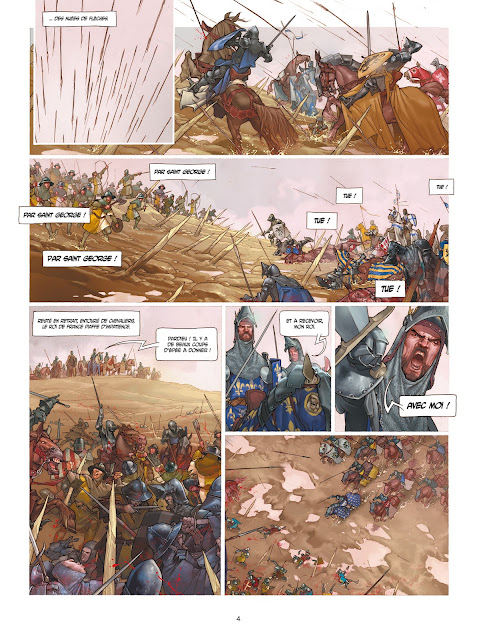 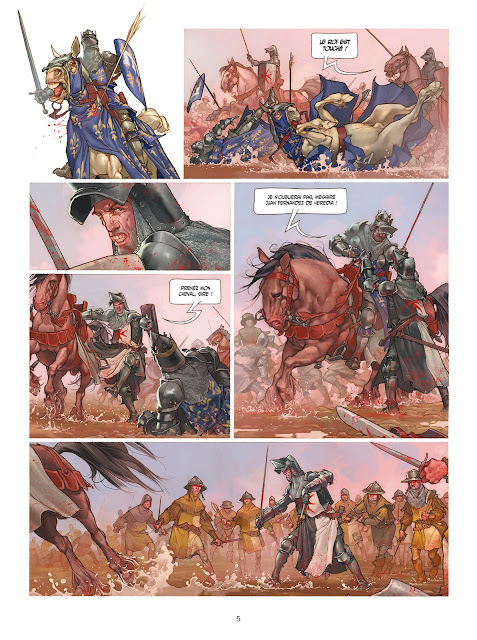 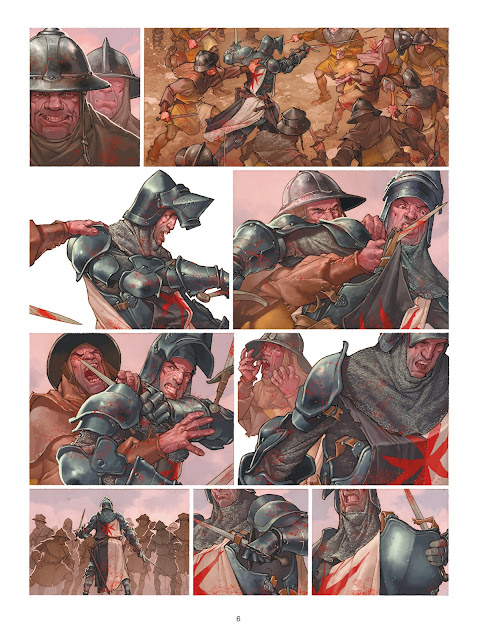