Starting a new unit: the Watch

It's been one year since I've initiated this Empire army project and so far, I haven't painted any mandatory troops. It was time to fix that :)

The Helblitzen (or halberdiers) will represent the honourable members of the Guild of Lamplighters and Watchmen. In other words, the Watch...


The main objectives for the Guild of Lamplighters and Watchmen are to: (1) ensure that all street lamps in the town are lit within one hour of sunset and extinguished at dawn; (2) call out the hours of the night and the state of their patrol (“one o’clock and all is well”); and (3) take into custody or spot fine anyone disturbing the public peace. Several patrols of five to eight men are assigned to the solidly-built Watch barracks located in each district.

[...] Like many of the large towns and cities in the Empire, Pfeildorf is divided into separate administrative districts, within which are smaller neighbourhoods. The frequency of Watch patrols vary by district with the most regular occurring in the Alderhorst district. The number of patrols lessen the further away a district is from the hill though the number of Watch in a patrol increases. Watch patrols consist of two to six men led by a Sergeant.

So, the idea is to build a regiment gathering patrols of the different districts of the town, each one having its own particularities and coats of arms.


I'll start with the Mórrsfeld district and St. Quintus Prison.

The warden is a MM62 citizen (CZ13), slightly converted with the addition of a bunch of keys for the jails. I'm still unsure about the Chief interrogator and torturer, but I have already prepared the Executioner: a hooded ogre from the MM42 range :) 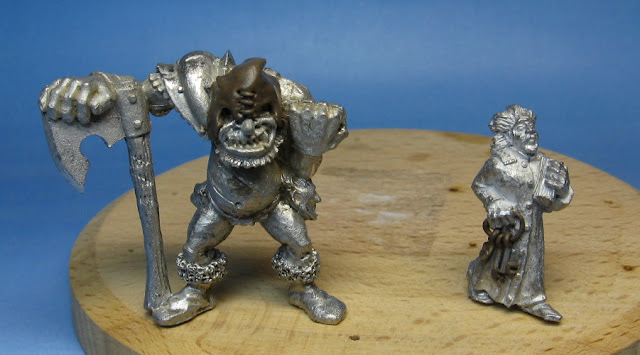