The Tailors' Guild Master and his shield bearer

I was recently browsing Cadwallon's Player Book, studying Gary Chalk's artwork in search of ideas to improve the look of the Guildhouse militia. And I remembered that I really liked the idea of  the Weapon Bearers: as it is forbidden for beings taller than 1.50 meters to bear weapons in the upper city, small people hire their services to transport weapons, which allows rich Cadwës to bypass the rule of the upper city.
Eureka! I was going to use the halfling range MM64 as shield bearers for the Guildmasters of Pfeildorf.

Referring to Mad Alfred's work on Pfeildorf, we know that:


Guilds are a major political force in Pfeildorf. These regulate the economic issues and rules of their respective trade throughout Sudenland. The guilds control their members in other parts of the province through use of smaller outposts in Geschburg, Kroppenleben, and Steingart.
The most influential of the Pfeildorf guilds are the Shearers’, Tailors’ and Weavers’, Tanners’, and Cobblers’, who also happened to be the ones involved with the major portion of the town’s exports.

[...] Other guilds are important to Pfeildorf and make certain that the four major guilds represent their respective interests as well.These guilds include the Artisans’ (a mix bag of craftsman not covered by other guilds), Bowyers’ and Fletchers’, Builders', Rivermen, Smiths’, Stevedores', Teamsters', and Vintners’.

OK. So let's start by an easy one: the Master of the Tailors' Guild. The model comes from the MM62 Citizen range, reference CZ 11. For the shield bearer, I've selected the halfling HL6, slightly converted by removing the finger in the nose, adding a shield and replacing the spade tool by a dagger.

Obviously, the shield had to bear the colours of the Tailors' Guild. Again, Cadwallon was of great help to define the concept. Below a part of a Gary Chalk's illustration that can be seen in Cadwallon Secrets Volume 1, and the resulting shield:


And here is the final result: the merchant and his shield bearer. They will stand in the front rank of the militia... until the battle begins of course :)


(The piggy face of the merchant is all my fault: I've let the miniature fall on the nose :( )

Since each Guildmaster will bear the colours of his guild, I've sent the former standard bearer back to the usual and safer job of an ordinary militiaman... which means putting back in place the hallberd I had previously removed... 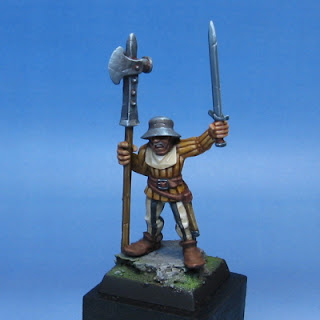