OWAC IV - The Hammerers - Part I

After the paymaster joined my mercenary army last month, I had to protect him with some hardened bodyguards: the MM16 hammerers.

Although they are among the best sculpts of the Marauder dwarfs range, I've always found these models quite difficult to integrate into a Renaissance army, as their heavy armours don't fit with the puff and slash style of the MB1 pikemen or MM15 quarellers. The second thing that made me hesitate for almost three decades is the fact that the helmets and ornaments are very different from one miniature to the other: not so easy to build a consistent regiment with such various models.

Finally, I have solved my self-inflicted problems by imagining that each clan would provide one champion to the bodyguard unit to 1. defend the paymaster and his precious cart, and 2. ensure that the other clans don't get to close to the gold. So, instead of having a unified theme for the whole regiment, each bodyguard will bear the colours of his own clan.

Keeping in mind the parallel between the Dwarf Clans of the Grey Mountains and the Old Swiss Confederacy, I have used the coats of arms of the eight first cantons composing the federation. Below, from left to right: Glarus, Zug, Unterwalden, Schwyz, Uri, Zürich, Lucerne, (Unterwalden again) and Berne. 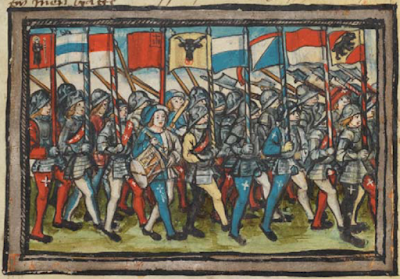 For the canton of Glarus, a dwarf ancestor replaces Saint Fridolin on a red field:

For the forest-canton of Unterwalden, I have replaced the white-and-red key by a silver key on a red-and-white field, whose colors matched the metallic feathers on the helmet.

The white cross on a red field is directly inspired from the coat of arms of the canton of Scwhyz:


And I have painted the colors and coats of arms of the cantons of Lucerne and Zug without any modification:

That's it for the first rank!