After considering elves, skaven, and melniboneans, I've finally made up my mind for this new edition of the Old World Army Challenge: puff and slash dwarfs again 😜

For OWAC V, my plan is simple: add 10 pikemen and 10 crossbowmen to complete the mandatory troops (i.e. 40 Dwarf warriors and 20 crosssbowmen), boost the fire power of my mercenary dwarfs with 20 thunderers, and finally paint my mounted general 🐴

If time permits, I will paint a few extras, including wild dwarfs, new bodyguards for the paymaster, and a cart for the bishop.

My prepared miniatures so far: 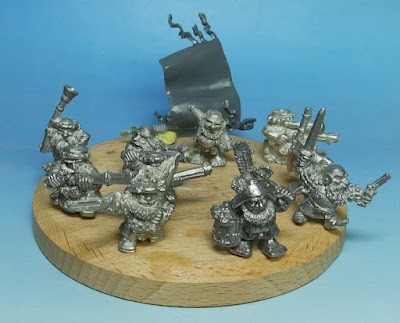 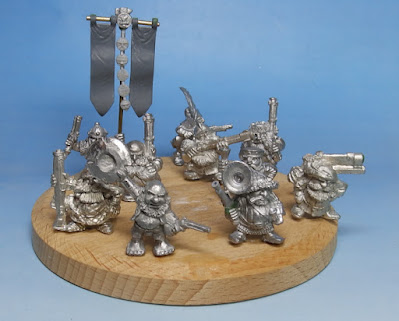 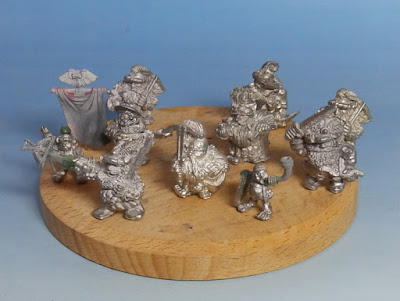 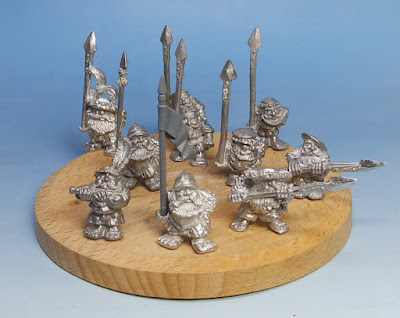 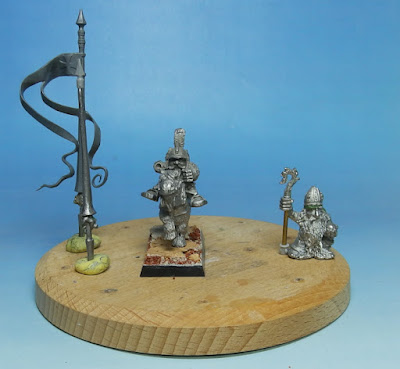 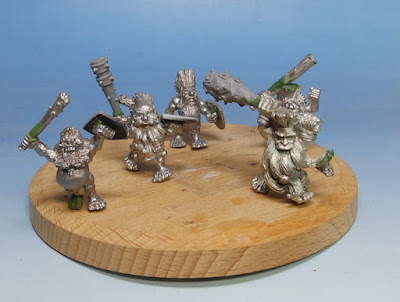 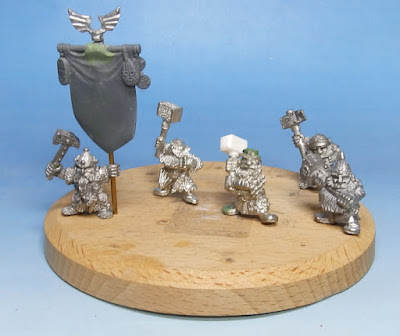 And finally the wagon, based on a Perry Miniatures carroccio, with Fenryll wheels and a few GW bits.

Finally! With these halberdiers, I am completing the Frostpeak clan initiated during the OWAC IV. No conversion this time, just 3 Marauder Miniatures from the MM10 and MM15 ranges.

And using the former captain (and now simple seargent) of the last OWAC, here are the miniatures painted since July. 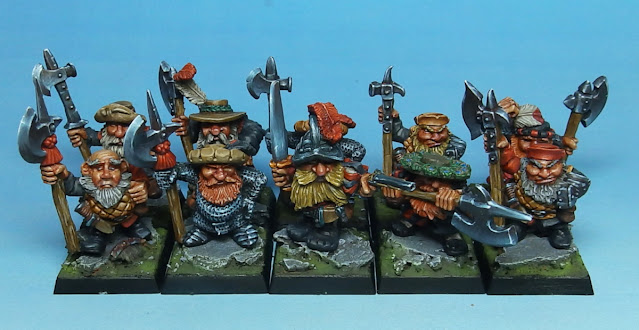 So what's next? Probably the preparation of 40 to 50 dwarfs for the next OWAC...

Same old dwarves, painted for the second or third time... Despite my efforts, it seems that I'm only able to paint rear rank miniatures these days...

Another couple of dwarf halberdiers

It's been two months since my last post, and I have little to show: two slightly converted Marauder Miniatures (MM10 and MM15) to strengthen one of the units painted during the OWAC IV.

As for my next move, I really don't know.

I've lost my enthusiasm for the Pfeildorfers, and although I'm only short of a few miniatures, the perspective of painting 20 to 30 more Marauder Miniatures (the remaining citizen, the mounted knights, the command group and the wizards) bores me by anticipation :|

As for the swiss dwarves, I clearly see the path forward: complementing the halberdiers and the pikemen, then a second regiment of quarellers, a new regiment of thunderers, a few warmachines, the mounted general and the High Priest of Grungni, plus a few warrior-monks... But again, the perspective a spending one more year on them seems... uninspiring.

Well... Let's hope my mojo comes back before the end of the year!

Even if the OWAC IV is done, I still have a number of Marauder dwarfs to paint! So the plan is to use my summer vacation to try some ideas I've had during the last 6 months, but without enough time to develop them. No painting job here, just a modelling knife and some greenstuff. We'll see where it brings us... (probably not very far 😆)

In the meantime, here are my latest models (MM10 references DW20 and DW28), slightly converted to join the halberdiers of the FrostPeak Hold.

See you in September! 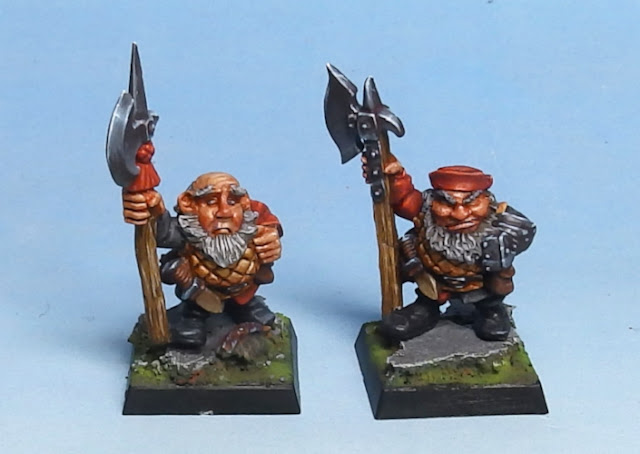 I've already posted my wrap-up on the OWAC blog, but I thought I might share a few additional pictures here.

So, here we are, after 6 months of painting, my second dwarf army of around 1000 points: 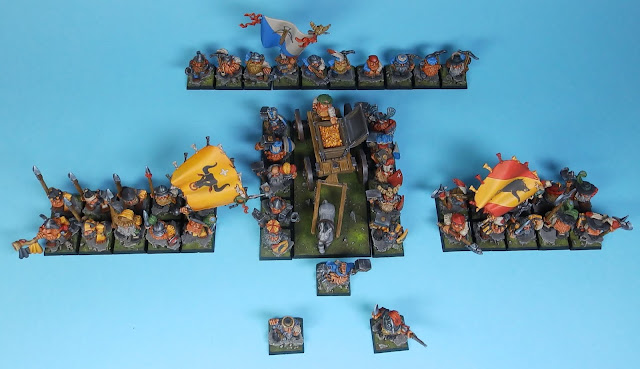 I've already mentioned here that I had still a couple of ideas to exploit with the Swiss theme, such as the hot chocolate pot, the clockworkers, or William Tell the quareller, plus a few things I'd like to finish, the general on poney and the Archbishop of Grungni, and of course several tens of Marauder Miniatures that are still waiting for their basecoat...Maybe for the next OWAC edition in 2022?

And we are back in Pfeildorf! After a welcome "dwarf break", the last two halberdier models I had to complete the city watch.

Nothing much to say, this is the second or third time you're seeing these models on this blog :)

And then what? Well, I still have a lot of Marauder Miniatures waiting for their basecoat, but I have to admit this perspective is a little bit disheartening... too many years spent on this army I guess. In need some vacations, far from the Empire :o) 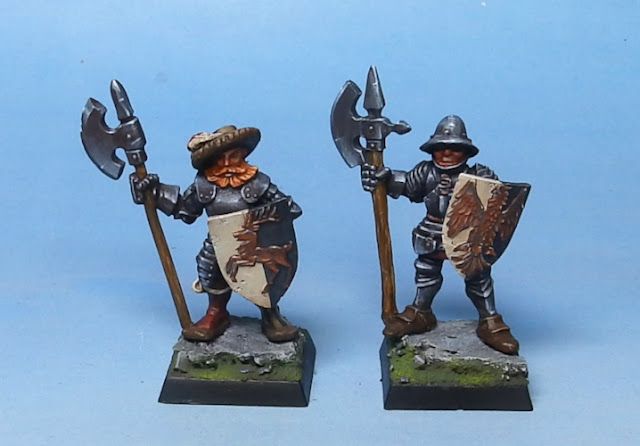 As I am considering extending the painting of this army to the next OWAC, I've decided that my dwarf priest deserved additional thoughts and preparation. As for the mounted captain, my first attempt to paint the poney failed miserably... and instead of insisting, I have opted for other characters.

So, let's start with the first one, the Annalist of the company, who happens to be a dwarf wizard of the Marauder range, MM10 DW10.

The second character and current leader of the army is one of the Captains that takes command of the dogs of war when the General is not on the battlefield. The model is the well-known leader of the MB1 regiment:

The third character is one of the MM11 champions, that will lead the bodyguards of the paymaster.

I still have a few ideas to explore for my Swiss Grey Mountains mercenary dwarfs (such as clockworkers, a chocolate hot pot, or a "William Tell" quareller), plus a full box of Marauder dwarves waiting for their basecoat, but I have to admit that the initial impetus stemmed last month while painting my crossbowmen.

So that's it for OWAC IV! 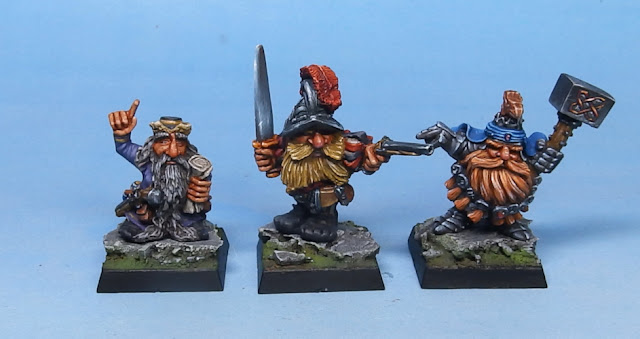