Enter the Frostbeards clan with this unit of quarellers! From the beginning of this OWAC, I wanted to paint something close to the banner of the shooters of Zürich (1513): I have therefore used the blue-and-white scheme of this canton to depict the Frostbeards. 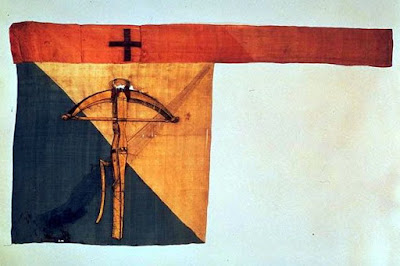 Written at the same epoch, the illustrated chronicle of Lucerne shows a similar flag, this time with an horizontal crossbow:

In the end, I have opted for the vertical option, and decided to replace the upper red strip by painting in red the ribbons hanging from the pole, and sewn to the outer edge of the flag. As for the crossbow, I needed a more stylized design, and I have slightly adapted the model drawn by Gary Chalk in the Warhammer Armies book:

For the painting job, same technique already used for the BlackHorns and the FrostPeak banners: first, paint a grid on the flag undercoated in white, then draw the crossbow with light brown using the grid as a reference, then hide the grid by painting a background as uniform as possible, then paint the coat of arms, and finally (try to) suggest highlights and shadows on the flag itself. I've painted thin lines to figure the fabric of the banner, with limited success I would say. I've then tried to correct the mess, the result being worse... If I had doubts about blue-and-white schemes, I now have the confirmation that I suck at painting them :) Anyway... 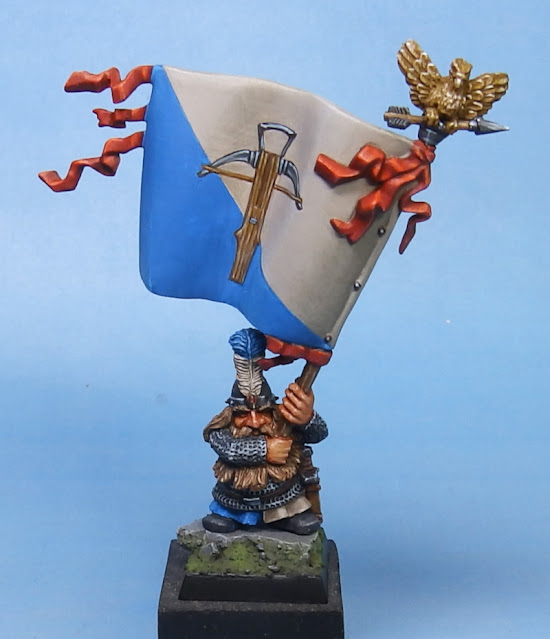 As there is no crossbowman musician in the Marauder Miniatures range, I have slightly modified my second MM11 hornblower model by replacing the original axe by a more suitable weapon.

The other shooters are just ordinary MM15 models: 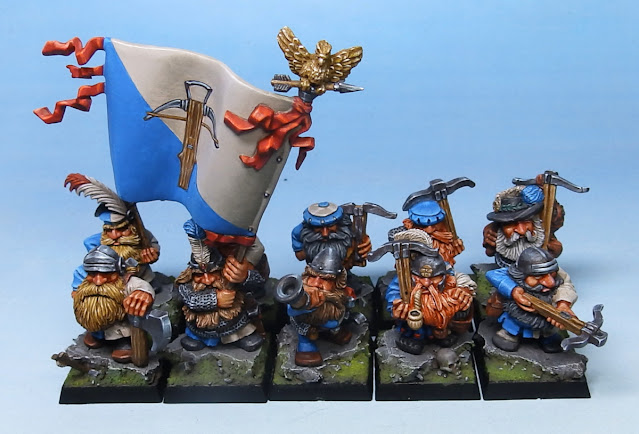 See you in June for the mercenary captain! (and hopefully a few additional dwarves).