Standard bearers are probably the most time consuming models in a regiment, and this one was no exception.

The emblem of the BlackHorns clan being the famous auroch of the Grey Moutains, I've searched for inspiration in the existing banners of the Canton of Uri (left: Sempach banner, 1386 - right: Julius banner,1512)...

... and finally used as a starting point the coat of arms of the Warhammer Ostland :)

Painting on curved surfaces while keeping the proportions can be tricky sometimes. Below a few pictures (shot with my smartphone, a little bit dark I'm afraid) showing how I have processed:

Still a few additional hours to spend on shadows, highlights, and all the tiny little details (the tongue I had initially forgotten). And you're done! 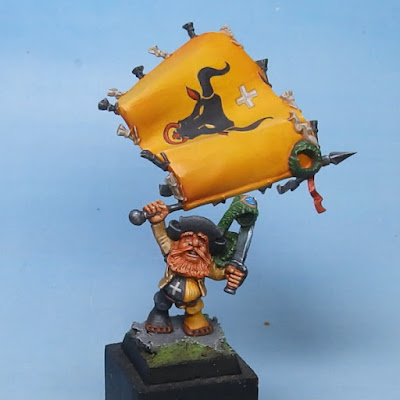 The back is far less glorious :p 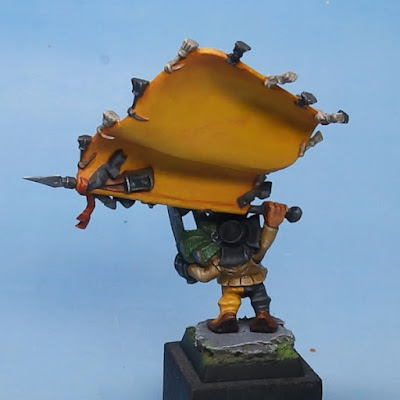 Another idea I found in the illustrated chronicles Luzerne Schilling:

These naked hairy men are "woodwoses" or wild men of the woods, and they were sometimes used in medieval representations to present coats of arms (in our case, Lucerne and Uri). Anyway, these beards tinted in the colors of the Cantons is a nice touch I had to try... with mitigated results I would say. 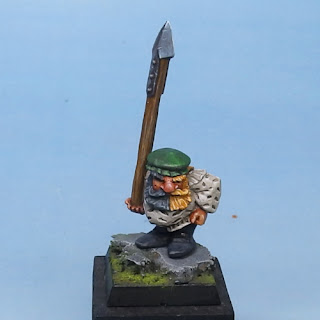 Next post, I'll show you the other models painted for the BlackHorns clan.