The Guildmasters of Pfeildorf and their militia

I really wanted to complete this regiment before the end of this year. As I said before, the 8 last models painted these last two weeks were meant for the rear rank, so, even if the painting is not perfect, it is barely visible :)

Enough talking, pictures! On the front rank, the Guildmasters, the shield bearers and their fiercest bodyguard. Behind them, a bunch of Marauder Miniatures (mainly from the citizen MM62 range) and a last rank of Citadel Fighters/Dogs of War designed by Aly and Trish Morrison. 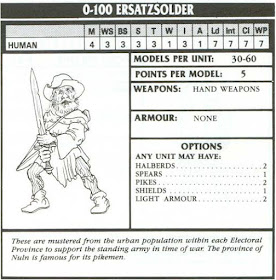 And now the army points: my militiamen are equipped with spears and light armour, plus a musician and a standard bearer, which gives a total of 272 points. Less than 10% of the whole army... Sigh.
Jaeckel at 10:45 PM
Share